Now that my book has been sent off to the publisher, I’m working on the next project. This one has me delving back into the Greek of the New Testament. It may be, some would say, that I’m no longer an expert in such things. Coming to Koiné Greek, however, after lingering among languages like Ugaritic and Akkadian, feels like coming home. It’s Indo-European, after all. One of the books I’ve come back to is 2 Peter. This is a curiosity among the canonical books. All but the most conservatively predisposed of scholars note that this little letter didn’t actually come from the Peter. The idea of using someone famous as a literary pseudonym was a well known and widely accepted practice in ancient times. In fact, the prefix “Pseudo-“ on classical writers is so common that I feel just a little self-conscious. Nevertheless, 2 Peter contains fascinating ideas.

The Bible was influenced, of course, by many outside sources. One of those sources was Zoroastrianism, the religion of ancient Persia. This came to mind because 2 Peter is the only book in the Bible that describes the end of the world as burning and melting. These ideas are tied to the purifying fire of Zoroastrianism. In that religion an evil deity, Angra Mainyu, corrupted this world. Fire, in Zoroastrian thought, is holy. At the end of time, when the blessed ascend to a heavenly mountain, a river of fire will pour down, burning and purifying the polluted earth left behind. The idea is powerful and evocative, and obviously some early Christian writers cottoned onto it. Including 2 Peter.

The idea, in the Bible, stands isolated in this one single book. The real concern of the epistle is false prophets, though. Still, the worldly should take note. The universe in biblical times consisted only of this relatively flat planet—which wasn’t even a planet then—with a starry dome overhead and a fiery Hell beneath. Ironically, 2 Peter’s end is similar to that predicted by modern astronomers. A star the size our sun will likely bloom out into a red giant, parboiling the earth in its death throes. Seems the Zoroastrians, and Peter, may have been correct after all. The thing is they both had an escape hatch that will only come with interplanetary migration, according to science. But then, all of this assumes there will be a world left after the Trump administration. And speaking of false prophets, I wonder what 2 Peter would’ve had to say about that? 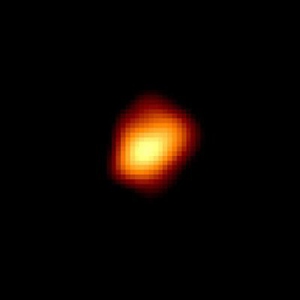 One thought on “Peter and the Red Giant”