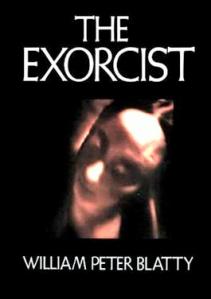 The debate is about as old as celluloid itself; which is better, the book or the movie? The response obviously depends on personal taste, and I suspect that many people base their answer on criteria that can’t exactly be quantified. Often it’s a matter of the specifics—which book? Which movie? In my own experience I’ve done it both ways, read the book first and watched the movie initially. I’ve even gone to movies not realizing there was a book and, of course, some movies aren’t based on books at all. You couldn’t grow up when I did, however, and not know that The Exorcist was a movie based on a book. I never saw the movie in a theater. There was a lot of buzz about it in my hometown, of course. I hadn’t been introduced to modern horror yet—still being a Fundamentalist at the time—and besides, it was rated “R” and I wasn’t.

I finally got around to reading the book. At this point in my life I’ve seen the movie several times, so I knew how the story was “supposed to go” beforehand. The fact that William Peter Blatty wrote the screenplay suggested it would be close to the novel, and indeed that’s the case. Novels, by their nature, tend to have more information about the storyline than is obvious from a film. The author can take time to explain things that don’t translate visually, including scenes where one character lectures another, like this blog. Since I’m writing a book about demons in movies, I paid careful attention to this. One of the themes from the novel that didn’t make it to the movie was witches.

That surprised me a bit. I had seen the movie first and it was plenty scary just as it was. I had to remind myself that my younger years coincided with the rebirth of the fear of witches. Literal ones. I’m not an astute enough sociologist to say whether the “witch hunts” of McCarthyism led to a hypostatized fear of real witches or not, but people were afraid in those days, as I recall. The Exorcist tapped into cultural fears in a way rare for a horror movie. It spoke to the fears of the era, but it didn’t mention witches. I couldn’t help but make the comparison with Rosemary’s Baby, which hit theaters shortly after The Exorcist. Rosemary believes the Satanists are witches. There’s a whole supernatural concoction of malevolent entities on the loose. Witches, ultimately in the novel, are simply one avenue the desperate Chris MacNeil explores to find out what’s wrong with Regan. The movie, wisely in my opinion, chose to leave it out. Demons are scary enough on their own, but of course even that’s debatable.

One thought on “Movie v. Book”