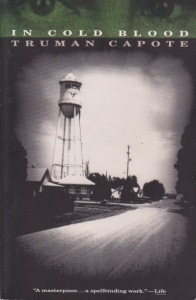 I’m not sure why I did it.  Read In Cold Blood.  I’d known of Truman Capote’s main claim to fame for years, but an accidental recent mention, a cheap copy in a used bookstore, and a week of grabbing time to read did it.  I’m not a fan of true crime, and despite my fixation on horror movies, I try to steer away from anything that doesn’t have a hint of the speculative about it.  There’s a difference between horror and terror.  I’d happily lived a half-century without ever hearing about the Clutter murders and kind of wish that were still the case.  Yes, there are doubts about the veracity of Capote’s account at points and novelists are often convincing liars, but still, at the heart of the matter more than just four people are senselessly murdered in the course of the tale.

A few elements stood out in the reading of the book.  One was that given the naiveté of the 1950s I wonder how anyone could ever really want to go back to that decade.  We’re run by a government full of doddering old men who seem to idealize the falsity and utter conformity of an age that was really a pressure cooker in which cases such as this would explode.  I was born in the much idealized 1960s but I don’t think we should go back to them.  We learn, we change, we grow.  Knowing what we now do, it was kind of painful reading how blissfully ignorant so many people were.  We may be more afraid these days, but at least we’re more realistic.

Another factor, very much at home in this world older but no wiser, is how the Bible is cited at the trial in support of capital punishment.  Although it may not have been intentional on Capote’s part, he demonstrates a deep truth about Scripture.  It can be read in more than one way.  In conservative Kansas in 1960 it could sway jurors to seek the death of other human beings.  The murders were indeed savage and pointless.  Capote’s account of them is difficult to read.  Perhaps more difficult is the way the Bible is used to unleash the basest instincts of people against other human beings.  Yes, parts of the Good Book require the bad thing, but if we’re over fifty years beyond Holcomb we’re over fifty score beyond a time when just one interpretation stands for all.  If it ever did.  There’s a difference between horror and terror, but the Bible can participate in both.  I prefer to stick to the former.