Maybe it’s just a sign of passing years, but spring seems much more sudden to me now.  One day I’m wearing multiple layers and shivering in the mornings and the next day I need to take a machete to the lawn for its first mowing.  Those weeds along the fence, which weren’t there a day ago—I swear!—are now two feet tall and aching for an appointment with the weed whacker.  I mean, the snow shovel’s still on the porch.  When did this happen?  How did we go from brown grass to sprouting trees of heaven just overnight?  I haven’t had time to build up my calluses yet for pushing the lawn mower (we have the environmentally friendly kind, powered by naught but human effort).  Morpheus was right, I guess.

This past week was so unexpectedly busy that I haven’t had time to stop and muse over some important happenings.  My current project, Nightmares with the Bible, involves trying to sort out The Conjuring universe, and I wanted to reflect on the passing of Lorraine Warren.  Her obituary in the New York Times  by Neil Genzlinger was surprisingly respectful.  Whether or not she was really onto something, people in general seem to believe she and Ed were sincere in their convictions.  There are those who claim they were charlatans, but those who perpetrate hoaxes tend to leave telltale signs.  Those who claim they couldn’t have experienced the paranormal because there’s no supernatural to experience are entitled to their opinions, of course.  Being tolerant of those who see differently, however, has never been more important. 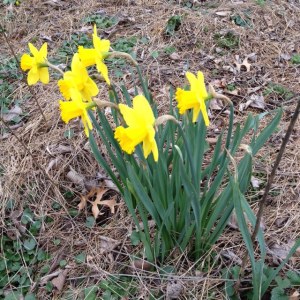 The natural cycles of the earth never fail to surprise me.  Supernatural or not, the explosion of life following one warm, wet week is nothing shy of astounding.  I walked around to the seldom visited north side of the house to find a veritable jungle that wasn’t there just the week before.  Staring at the flowers and weeds, I can’t help but think of the hackneyed phrase “pushing up daisies.”  Much happened this past week.  The mower was oiled up and played the grim reaper to the grasses and other plants of my neglected yard.  Life, as Jurassic Park (which my lawn resembles) teaches, is persistent.  I never met or in any way corresponded with the Warrens, but I feel that in some sense I have gotten to know them.  And just yesterday it still felt like winter.