I once knew a man who was what can only be called a pathological liar.  I never knew when he was telling the truth.  It was a disorienting experience relating to him because, as a literalist I wanted to believe what others told me.  In this case you simply had no solid ground on which to stand.  Recently someone else who knew him (he died some time ago) asked me for some information about him.  I was at a loss to come up with anything.  Since he seemed routinely to mix fiction liberally with fact, I didn’t know where to start.  In this post-truth world we now inhabit, I fear this may become much more common.  Everyone lies from time to time, but when it is a way of life, well, even Jesus had a name for the “father of lies.”

It’s with a bipartisan sense of sadness that I lament how the Republican Party has completely backed up a man that they know is like this.  Intentionally or not, political leaders set the character of nations—just consider how often we think of Russia as Putin or North Korea as Kim Jong-un.  America has become the nation of lies.  Don’t believe me?  Maybe I’m lying.  See what I mean?  Often I tried to figure out what this man I knew was up to.  What was his endgame?  I couldn’t be sure I’d ever know, even if he told me.  Especially if he told me.  You see, I was quite young at the time, and the young often don’t have the experience to get to the truth.  And when the truth is bartered for power, well, the father of lies is lurking nearby.

Recently I finished reading M. Scott Peck’s People of the Lie.  This person I knew was in my mind quite a bit as I tried to sort out all the psychology being presented.  If I’m honest I know that even as a child I said this man was evil.  It was clear to me that he wanted to survive on his terms or no terms.  To do so, he believed his own lies.  Now I don’t know if he lied at work.  He had a job where many people depended upon him to carry out his tasks.  He seemed to do so conscientiously.  When not at work, however, he was back in the land where he felt the most comfortable, the land of untruth.  Recently someone again asked me about him.  I tried to recollect as much as I could, and like much of the world these days I answered, “I just don’t know.” 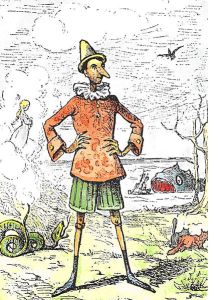