The media is chattering about one of the very many contradictions of evangelicals who support Trump.  Since I have a foot in the world of the Bible business, I read with interest how Trump’s tariffs on China will put Bible publishers in a bind.  You see, the Good Book is generally sent offshore since printing costs (and technologies) are too expensive to replicate in God’s new chosen nation itself.  This lack of divine foresight should be a bit disturbing.  The entire evangelical enterprise is based on their reading of Scripture, and the belief that the divine choice of America is behind such momentous events as 45’s election.  Maybe we should check our pipes for lead.  In any case, Bibles, which are printed cheaply in high volume overseas, are set to become too expensive to give away because of the great pretender’s tariffs. 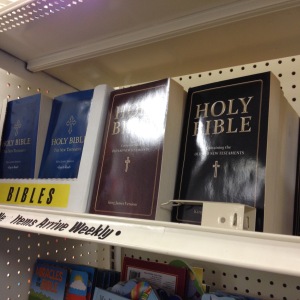 A few media outlets have picked up this story, including one that noted Trump’s favorite Bible verse is “an eye for an eye, and a tooth for a tooth.”  The famous lex talionis statement was famously, well, trumped by Jesus who said that the ideal was to turn the other cheek.  In a rather Philistine way, evangelicals have sided with a man who says Jesus was wrong.  If you want to check up on me in your Bible you’d better get your wallet out.  Ironically from a Republican point of view, tariffs are themselves the breaking of the commandment of free trade.  Still the party that claims to believe that does nothing to prevent the sale of their souls, cash on the barrelhead.

Many evangelicals may find the idea of Bibles as a business distasteful.  It is, however, extremely profitable for those on the supply end of the deal.  Bibles are printed at a volume that would make most authors green, and due to its size the Good Book requires specialized paper most of the time.  This is so much the case that Bibles not printed on “Bible paper” just don’t feel like sacred writ.  Since costs of living in the United States are quite high, and since this kind of specialized printing would be too expensive in this situation, publishers outsource God’s word.  Some publishers have been pleading with the government to exclude books from Trump’s tariff so the Good News can continue to spread.  The fact is that only one deity, called Mammon in the Bible, runs this enterprise.  And to continue to buy Bibles at the evangelical rate will soon be requiring an act of sacrifice.  I guess the lex talionis still applies.

One thought on “Trumping the Bible”