Okay, so I wrote a post a couple days ago about evangelicals challenging Trump’s China tariffs because it will raise the price of Bibles.  Little did I know that Miriam Adelson wants a “Book of Trump” added to that very Bible.  Now, heroes are a personal business; to each their own.  Adding someone to the Bible, however, especially when that person has no idea of what Jesus said, is problematic.  Biblical and ecclesiastical scholars know that even if most Christians agreed books simply can’t be added to Scripture.  Many think the Gospel of Thomas should qualify—it may actually be closer to the words of Jesus than some of the canonical gospels and was putatively written by a disciple.  Thomas, however, will never make the cut.  Early bishops and elders in the church set pretty firm limits to the New Testament. 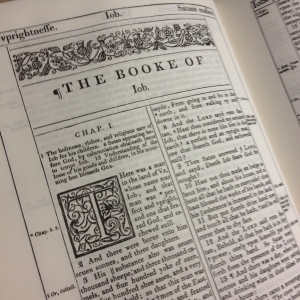 Some religious traditions, such as Mormonism, have gotten around this impasse by writing entirely new sacred texts.  Loyal Trump followers might indeed fit the description of what used to be called a cult.  Thing is, George W., and George H. W., and even Ronald Reagan were more religious than the incumbent and nobody suggested adding them to the Good Book.  Our world has somehow flipped upside down in the last three years.  All I know is that in the photos of Trump with the most Jesus-like Pope in modern memory the Holy Father wasn’t smiling.  Then again, the Pontiff would likely not autograph Bibles if asked to do so.  Has anyone suggested a book of George Washington?  There’s such a thing as getting carried away.

The Bible, apart from being the sole recognized authoritative text of the world’s largest organized religion, is an iconic text.  This means that the Bible is recognized as an important book—perhaps even a stand-in for God—without considering what it actually says.  This was a major point behind Holy Horror and it’s essential to understanding American political behavior.  Manipulating Scripture for political ends is generally the most cynical of approaches to the Good Book.  In America you can drive down highways and see the Bible advertised on billboards.  Large segments of an increasingly secular society are still motivated by it.  There was a time when it was believed that such cavalier suggestions as that of Ms. Adelson would constitute blasphemy, or would at least profane the founding book of Christianity.  In the minds of some Trump has clearly become a god.  So it was in Rome before the fall.