Call it nostalgia.  (“It’s nostalgia!”)  What with major expenses rolling in like the longer nights—a major plumbing job followed by the roofers back again to fix another leak—I try to accept my joys in inexpensive doses.  I’ve written before about how “The Legend of Sleepy Hollow” caught my childhood imagination.  My brothers and I, growing up in quite humble circumstances, were collectors.  Not having much money, the collecting tended to be of free stuff, much of which drove our mother crazy.  Bottle caps, believe it or not, could be had for free from the openers on vending machines that dispensed genuine glass bottles.  We had bags full and the aroma was wonderful.  We had baseball cards—which were cheap and would now be worth something had they been kept—by the boxful.  And we collected stamps because they came free in the mail.

Yes, even bills used to have stamps.  The Legend of Sleepy Hollow stamp was released for Halloween in 1974.  I don’t recall how I heard about it, because there was no internet in those days.  I knew, however, that I fervently hoped one would come so that I could add it to my collection.  It never did.  In fact, I never actually saw the stamp itself.  When we moved house my childhood philatelic ambitions met an abrupt end as those endless childhood collections (which included metal slugs dropped from trucks rumbling out of the local steel mill and fossils found by the river under the bridge where those slugs pinged) were simply thrown out.  I would never see the coveted stamp, and now we use email.

It took many years—decades now—to occur to me that the stamp might be available online.  I guess I had pictures of the price tag of that upside-down airplane stamp in mind as I navigated to a vendor who was asking less than a dollar for a mint copy of a ten-cent Sleepy Hollow stamp.  Gritting my teeth between plumbing and roofing bills, I finally clicked “check out.”  With postage ironically costing more than the contents, still I felt giddy.  This was a piece of childhood on a simple slip of sticky paper.  I am not a stamp collector.  I will likely never be.  I do have vivid memories of bags full of aromatic bottle caps, and shoeboxes groaning with baseball cards, and cheap albums with common stamps.  They’re long gone.  But on my desk I now have a small piece of memory from many years ago, and  I have to wonder if I’m the pedagogue or his headless haunter. 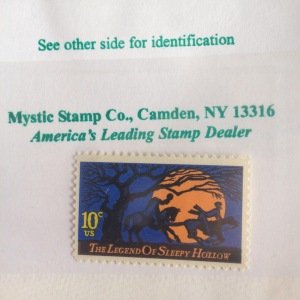