Something happens to you on a long bus ride, reading a mind-blowing book.  Part of the transport—literally—is that you’re captive for an hour or two and your book is your boon companion among snoring strangers.  Another aspect is the earliness of the hour.  Days like yesterday, when I have to commute to New York, involve awaking at 2:30 a.m.  The day is cast very differently when your timing shifts back by a few hours.  It’s almost mystical.  The largest portion of the transformative experience, however, is the book itself.  I’ve begun commutes with a book that I quickly realize is a mistake, but since I’m not a quitter, I soldier through it to the end anyway.  On yesterday’s commute the book was one of those that caught my imagination and flew it like a kite from the rear of the bus.  Arriving in Manhattan before six a.m. added to the feeling.  The city’s a very different place that time of day. 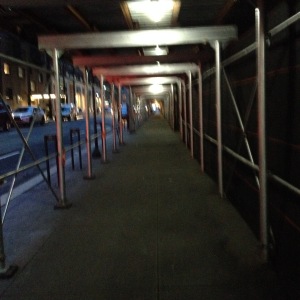 Not everyone enjoys reading, I realize.  My late stepfather once had a job as an elevator man.  Not the kind dressed in livery at a big-city hotel, but as an operator in an antiquated building in Oil City, Pennsylvania, where you had to pull the metal gateway  physically across the door and wait until the floor leveled before opening it again.  I didn’t get along with my stepfather, but one day I went to visit him in the elevator.  It wasn’t a busy building.  He sat on a stool, staring straight ahead.  For hours at a time.  Not a man prone to meditation, I knew he had to be bored.  I asked if I could bring him something to read, at least.  He declined for fear of missing someone’s call signal.  It was one of the most frightening scenarios I could imagine.

The clock in the Port Authority read 5:49 when we pulled in.  The day seemed full of possibilities.  I caught the 4:30 home, but the magic was gone.  The book had moved on to more technical things.  Traffic was bad, and there’s a world of difference between reading while the bus moves and trying to do so when it’s caught in traffic.  The commute out of New York City is normally a nightmare, and yesterday traffic didn’t flow freely until we were nearly through New Jersey.  My book was still my companion, but rather more like when a conversation ebbs after an intense discussion.  There was the worry of getting home, taking out the garbage, and trying to stay awake until a reasonable hour.  The book would still be there tomorrow, but I wouldn’t be the same.