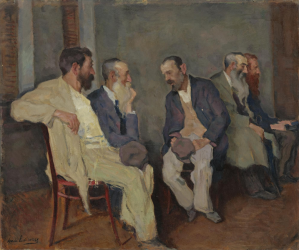 While I tend not to discuss books on this blog until I’ve finished them, I realize this practice comes with a price tag.  Reading is a conversation.  Your mind interacts and engages with that of another person (or persons, for books aren’t usually individual efforts).  I find myself as I’m going along asking questions of the author—whether living or dead doesn’t matter—and finding answers.  Materialists would claim said answers are only electro-chemical illusions spawned by this mass of gray cells in my skull, only this and nothing more.  The realia of lived experience, however, tells us something quite different.  These interior conversations are shaping the way I think.  There’s a reason all those teachers in grade school encouraged us to read.  Reading leads to an equation the sum of which is greater than the total of the addends.

I’ve been reading through Walter Wink’s oeuvre.  Specifically his trilogy on the powers.  Although this was written going on four decades ago, I’m struck by how pertinent and necessary it is for today.  As he posited in his first volume, the embrace of materialism has blinded us to spiritual realities.  Wink was bright enough to know that biblical texts were products of their times and that simple acceptance of these texts as “facts” distorts what they really are.  He also convinces the reader that institutions have “powers.”  Call them what you will, they do exist.  Throughout much of western history the “power” cast off by the church has been somewhat positive.  Christianities has established institutions to care for the poor and for victims of abuse and natural disaster.  Orphans and widows, yes, but also those beaten down by capitalism.  They have established institutions of higher education to improve our minds.  Until, that is, we start objecting that our improved outlook demonstrates that the biblical base isn’t literal history.

Churches then often fight against those educated within its own institutions.  Ossified in ancient outlooks that value form over essence, many churches take rearguard actions that we would call “evil” if they were undertaken by a political leader such as Stalin or Hitler.  Those evil actions are justified by claiming they are ordained by an amorphous “Scripture” that doesn’t really support those behaviors at all.  I’ve been pondering this quite a lot lately.  Although I taught Bible for many years my training has been primarily as an historian of religions.  I specialized in the ancient world of the northern levant, for that culture provided the background of what would eventually become the Bible.  Reading Wink, I think I begin to see how some of this fits together.  I won’t have the answer—we many never attain it—but I will know that along the way I’ve been engaged in fruitful conversation.