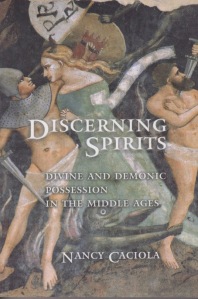 Perspective.  The ability to change it is vital to understanding.  I’ve been working with the idea of demons for a few years now.  My perspective, however, has been aided by Nancy Caciola’s Discerning Spirits: Divine and Demonic Possession in the Middle Ages.  Noting something that has long been a puzzle—behaviors attributed to saints were also recognized among the demonically possessed—Caciola suggests a solution.  In the Middle Ages very few female saints were canonized.  Delving into records from the period Caciola noticed that when saintly behaviors exhibited by men were experienced by women those behaviors were deemed demonic.  In other words, from a perspective that saw masculine experience as normative, when supernatural events were encountered in women they were seen as diabolical.  Using Hildegard of Bingen’s frame of an “effeminate age,” Discerning Spirits explores the idea of how the Medievals told good from evil.

My own experience of “discerning spirits” came about through a United Methodist curricular study on spiritual gifts.  I was in either junior or senior high school, and deeply involved in the church.  An adult study (I was close enough) on spiritual gifts explained the laundry list compiled by Paul in 1 Corinthians 12.  The apostle from Tarsus notes that discerning spirits is a divine gift.  I trembled as a teen, wondering if I might possibly have it (that was the point of the study).  It seemed like an immense responsibility.  The issue, it turns out, was nothing new.  Since codified in the Bible it had to be true, but what was it all about?  Smarter people than me were struggling with it.

There’s plenty of provocative and explanatory information in Discerning Spirits.  From ancient times it was understood that gods could possess people.  By the New Testament demons clearly could too.  We hear less and less about divine possession as time goes on.  In fact, it becomes a kind of heresy in itself.  Demonic possession was never really in doubt.  It fell out of favor with the Enlightenment, but it didn’t really disappear.  This book shows a clear trajectory from women’s possession as being demonic straight toward the witch craze that erupted in Europe toward the end of the Middle Ages.  It was no coincidence that the majority of accused witches were female.  The perspective had shifted with the fortunes of the church during the Medieval period.  Fear of schism and fear of unsupervised spirituality in a world where only men could be priests led to results that, in hindsight, look inevitable.  Caciola’s book is an important source for not only ages past, but also a mindset all too prevalent in our present world.

One thought on “Shifting Perspectives”