Our garage came with a house.  That’s one of the reasons we bought it.  You see, the one thing we don’t have is time.  (Well, that and money.)  When we were contemplating moving, we had no time off.  Vacation days for the remainder of the year had been allocated, and employers don’t like to encourage personal improvement.  Not on company time, anyway.  Which, of course, is as it should be.  We had to find a house with space enough to sort through things after we moved.  Ha!  As if there would be more time!  Still, the sorting would have to wait.  Our house has a detached garage with a second story.  It’s a converted barn, but I doubt its conversion story.  It still seems pretty heathen to me.  The neighborhood squirrels love it.

We store our unsorted stuff upstairs.  Shortly after we moved in, the squirrels had chewed through the stop-gap remediation the previous owners had put in place to satisfy our post-inspection demands.  It was pretty clear their solution wouldn’t keep out rodents, but our lease was about to expire and the market favored sellers, so we closed anyway.  Shortly after moving in I noticed styrofoam poking through the ceiling boards of the garage.  Then I began to find styrofoam chips in the yard nearly every morning.  I soon figured it out.  Squirrels raid the trash receptacles behind restaurants in town, and bring their carryout here.  No, seriously!  They haul styrofoam between the roof and ceiling, presumably licking off the scraps before tossing out the remaining foam.  I figure it’s a form of insulation, if nothing else. 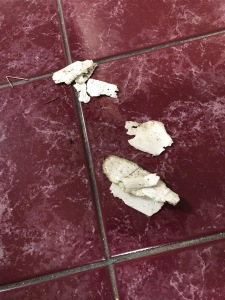 Squirrel remediation is on our list of projects.  I’ve seen the squirrels run up the side when they spy me stepping outdoors.  When I reach the garage, they’ll stick their little heads out the hole they chewed and scold me.  This is their place, the garage.  They’ve insulated it, and the inside is a mess where the birds also get in and there are little animal parties every night.  I don’t have time to clean up after the squirrels.  It occurs to me that if we didn’t have a throw-away culture we wouldn’t have styrofoam containers for the poor beasts to plunder.  The food’s probably not healthy—the squirrels I see look plump and sassy.  They like the convenience of living in a shelter someone else built and on which someone else pays the taxes.  Perhaps I should start a zoo.  But first I’ve got some stuff to sort through, when I find the time.  If only I could teach the squirrels some other tricks beyond dining out.

One thought on “For the Squirrels”