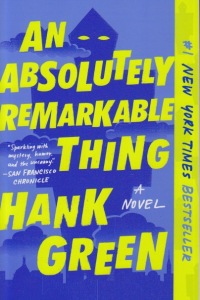 Fame is something most of us never experience.  In a world of billions we imagine what it would be like to have others pay attention to us.  Care what we think.  Admire us.  I can’t help but suppose that a large part of our political crisis is based on this concept.  It’s one of the reasons Hank Green’s An Absolutely Remarkable Thing is such a timely novel.  I’ve read a couple of Hank’s brother John’s novels, mostly in the Young Adult category, and I’ve been curious about this one for some time.  April May, the protagonist, isn’t seeking fame.  In an almost parable-like way it happens to her and she becomes addicted to it.  Safety and human relationships fall aside as she follows what seems to be the next logical step in order to secure more fans, more followers.  (There may be some spoilers below.)

There’s more than that, however, going on in the story.  Tales of “first contact” with alien intelligence often pose the question of humanity’s readiness for such an encounter.  The Defenders, a group that looks an awful lot like the right wing, are afraid.  They’re afraid of what humans might face once a superior power arrives.  Their response is to attack April, who, for some reason has been chosen as the first contactee.  Her fame isn’t accidental.  I’ve watched enough of Hank Green’s excellent YouTube videos to suspect he’s not exactly looking for a Christian parallel here, but April is a kind of messiah.  The book, in many ways, could be read as a recasting of Christianity’s foundation myth.  This isn’t a book with which most Sunday School teachers would be happy—there are adult situations and adult language.  They don’t cancel out the message of the book, however; I’ve known evangelists to use these techniques as well.  They help capture attention.

With all the books I read I have to admit that many are forgettable.  I sometimes read an old post on this blog, or a review on Goodreads, and find myself having forgotten a novel completely.  Something Hank shares with his novelist brother is the ability to make an impression.  It’s too soon to tell for sure right now, but this has all the marks of a story that’s going to be my mental companion from now on.  There’s wisdom and humor in it.  There’s a touch of Qohelet as well.  Whether intentional or not, An Absolutely Remarkable Thing follows the line of a classical story arc.  And the reason that stories have become classics is that they make us think.  I’ll be thinking about this for quite some time.  Fortunately, I don’t have to deal with fame—that would only be a distraction.