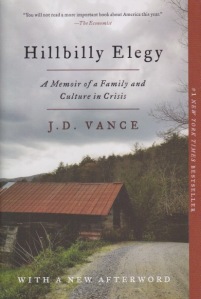 It’s amazing how often J. D. Vance’s Hillbilly Elegy comes up in conversation.  The book struck a nerve.  Reading it wasn’t easy because there were so many shades of my own childhood that I felt uncomfortable at several points.  Not from the same circumstances as Vance (his family seems to have been better off than mine, from the descriptions), I was more a hillwilliam (shoutout to the author of Verbomania for the portmanteau) than a hillbilly.  We weren’t educated people, but my mother’s family wasn’t as poor as the one she married into.  We were socially mobile alright, but in the wrong direction.  Anyone who hasn’t come home from school to find carp swimming in the bathtub simply can’t understand.  The way of the poor is inscrutable, but something Vance gets spot on—it is almost impossible to improve yourself without a leg up.

The chapter where this really hit me was as he was describing how easy his life was after being admitted to Yale Law School.  He made connections and learned to work them.  That part never came in my case.  Like Vance I grew up without a father.  Unlike him, I didn’t have grandparents to come to the rescue.  It’s a long story, but when I left home my life became a search for a father figure only to discover than nobody really wants to help somebody else’s kid.  Although I was accepted into the high profile schools, I had no one to coach me to go there.  Even now people barely recognize Edinburgh for the wonder that it is.  It didn’t connect me the way Yale Law apparently does.  My career has been in freefall a time or two because of this lack.  As Vance explicitly notes, when you grow up poor you don’t have the training or family experience to know what to do.

Many people, I realize, are much worse off than I was growing up.  What Hillbilly Elegy, written by a Republican, shows is that the government simply does not care for the poor.  In what used to be the wealthiest nation on earth there is a tremendous amount of poverty.  Vance has a keen analysis of what the abnormal psychology of want does to people.  I grew up more of a Pennsylvania redneck than a full-blooded hillbilly, but many of the same lessons apply.  While some of us can muster the willpower to escape, we know we are in the minority.  We learn as adults that others don’t share our concern for those who struggle daily to get by.  This is an important elegy, and if only it were read seriously by those able to make policy there might be some glimmer of light in these dark hills.  The right leg up can do wonders.

One thought on “Leg Up”