“Resurrectionists” was the name given to those who supplied the black market for human bodies when medical science had scant access, back in the eighteenth and nineteenth centuries.  They’d rob graves, and sometimes kill their own victims, for the money medical schools paid for cadavers.  It’s just business, some would say, I suppose.  It was illegal, however, and carried its own death penalty at times, if a resurrectionist were caught.  I was surprised to learn that somehow the United States has learned to do large scale resurrection.  Clergy, hang up your stoles—the government’s got it covered!  I discovered this in the most unlikely of places, the World Health Organization’s daily situation reports.

Like many people I wonder when COVID the 19th’s reign of terror will end.  I don’t trust anything that comes out of the White House, so I look to WHO.  The daily situation reports give the recorded number of cases of the virus, which, despite progress, keep going up.  The US, as always, is the world leader.  In addition to giving the number of cases, the website also records the numbers of deaths.  This is a sad and sobering statistic.  Additionally, it informs reader of how many new cases and how many new deaths have been recorded in the last 24 hours.  Here’s where I learned of our godly ability.  On Tuesday the number of new deaths in the United States was -1696.  This represents a mass resurrection indeed.  If only we’d share the knowledge with the rest of the world. 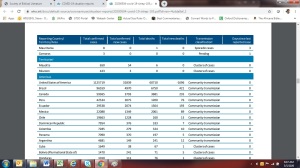 Here’s the insidious nature of statistics and governments who abuse them.  Stalin famously noted that one death was a tragedy but a million deaths are a statistic.  The US isn’t the only nation to play with the numbers—we’re all just statistics after all—but it is a matter of record that the Trump administration wouldn’t let the Diamond Princess land, although in American waters, because it didn’t want those cases listed as part of our stats.  So it still stands.  They are listed, of all the nations of the world, as “Other.”  Lest there be any doubt, the Tuesday WHO situation report ended with a note that American authorities “retro-adjusted” the figures.  You’d think that we’d want to announce with trumpet blast that we’d figured a way of retro-adjusting 1696 deaths.  For those of us listed as non-essential employees this is perhaps meant as a ray of hope.  Our work may be just icing, and we may be a single digit in our uncaring government’s eyes, but we can be brought back from the dead by political fiat. 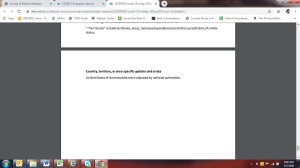