Apart from being Shakespearen click-bait, the title of this post reflects a present-day fear.  We live on the edge of rural Pennsylvania.  If you’re not familiar with the state, let me assure you, there are tons of woodlands and rural communities.  You can drive for hours in a straight line and seldom leave the forest.  When my wife sent me a warning email—I go to bed early and can’t seem to sleep late—I paid heed.  A bear has been ambling through our town.  My usual morning jog is along a trail at the edge of the woods.  Bears are crepuscular.  I watch horror movies.  Put it all together and a Shakespearean level of anxiety quickly builds.  It wouldn’t be so bad, but the photos show the bear romping through backyards and one of the reasons I jog the way I do is to avoid other people.

I see wildlife on my jogs.  I see deer frequently, along with feral cats, rabbits, and, in season, ducks.  I’ve seen raccoons, foxes, groundhogs, and even snapping turtles and salamanders.  It’s not much of a stretch to think a bear could be lurking there.  So instead I took to jogging the human streets.  The danger out here, of course, is the human-borne kind.  Covid-19 lurks, and even though I jog at 5 a.m. there are other elderly out and about.  I hear a cough and wonder whether my chances might be better with the bear.  The broken sidewalk’s a problem too.  I have tripped before in the half light, but without Superman’s knack for flying.  Or at least landing gracefully.

Thinking back, I wonder what has happened.  As I child I lived in truly rural Pennsylvania.  My brothers and I used to sleep on our open porch in the summers, even though we could occasionally hear bears going through the trashcans around the side of the house.  Our place was hard up on the woods, right at the edge of town.  I didn’t worry about the bears back then, though.  We’ve perhaps become more afraid of nature because we know we’ve not been good to it.  The episode of the X-Files we watched before bed last night had Scully saying that nature’s always out to get us.  Perhaps we’ve drawn too solid a line between ourselves and brother or sister bear.  We’re not above nature; we are nature.  But still, I’d rather not be pursued, or eaten by a bear, no matter how much I like Shakespeare.  So I’ll jog in town for awhile, taking my chances with the dangers of my own kind. 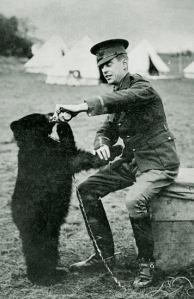