Education is important.  For example, I never really knew what Juneteenth was, although I’d heard the name a few times.  Perhaps because of the “teenth” part I had it in my head that this was something to do with young people.  The amazing thing I’ve been learning over the past several weeks is just how deliberate the “white male” narrative has been in perpetuating the racist mechanism in the employment of capitalism.  Years ago I learned that race is a human construct—it has no basis in science or biology.  It has served various entrepreneurs throughout history, beginning in 1619 and has been perpetuated ever since in order to ring the last possible copper from the coffers.  Now we see what that looks like when a standing president holds these “truths” to be self-evident.

Juneteenth was proclaimed in Texas in 1865.  Even in the extreme and conservative Lone Star State it was recognized over a century ago that all people have the right to be free.  Of course we don’t celebrate it as a national holiday.  Give people too much time off and they might get to thinking.  If, perchance that thinking turns toward the heartless machine of capitalism it might be realized that there are better ways to ensure people are treated fairly, regardless of their skin color.  This year, for the first time I have seen, many organizations—some of them corporations, even—are closing in honor of Juneteenth.  Black lives do matter.  We should be able to see that, but it takes innocent deaths to make the obvious appear. 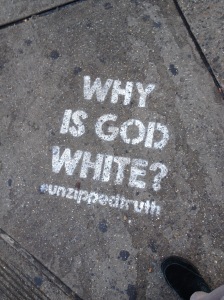 Yesterday I listened to three Pulitzer Prize winners discussing racial equality.  All three of them had written on the African-American experience.  All three knew the evils of racism.  Research has been done that indicates much of what stands behind white evangelical support of the Republican Party is racism.  Many of the movement’s leaders still buy into myths about race and believe it is something God built into the human soft machine rather than something we made up ourselves.  For political purposes.  We need Juneteenth.  We need reminders that the evil we’ve constructed can be dismantled.  People should not die because of a false human construct.  It wasn’t lack of curiosity that prevented me from learning about Juneteenth when I first heard of it.  No, it was being overwhelmed with the problems Washington was spewing out (and continues to), that I had to divide my energies depleted by the capitalist Moloch.  Now I realize, because by their fruits we shall know them.  Floyd George was murdered on camera and we need to expose the thinking that allowed that crime to happen.

One thought on “Juneteenth”