I can remember when Labor Day was about honoring workers.  I suppose it still is, in some circles.  At the top, however, the strategy is to give all the breaks to the wealthy and convince those they exploit that it’s for their own good.  In as far as Trump has a playbook, this is on page 1.  All around the community I see poor, exploited people with Trump signs on their houses.  And they’re big.  Great.  Never been bigger signs.  The policies he’s enacted, however, have taken money from their pockets and lined those of the wealthy.  Why do you think he refuses to share his tax records?  Tax fraud is a crime.  If you’re a laborer, anyway.

I grew up working class and I still think that way.  I’m skeptical, though.  I don’t take anyone’s word for it.  That’s what happens when you become a professional researcher.  Looking at actions instead of words is most instructive.  As my step-father used to tell us, “Do as I say, not as I do.”  Pay no attention to the man behind the curtain.  Just let him pick your pocket and tell you he’s been on your side all along.  Can Labor Day be anything other than a lie under such circumstances?  The American aristocracy has both a firm grip and tax incentives not to improve the lot of those who are barely getting by.  And yet we take a day off and pretend that everything’s fine.

Polls repeatedly show that those in power have no idea of the realities of the lives of the working class.  They can’t name the price of a loaf of bread and, especially in the present day, don’t care to.  Many people in the United States fear socialism.  Ironically, many of them are “Christians” who completely ignore the socialism of the book of Acts.  Early believers, the Good Book says, pooled their resources and shared everything out equally.  It’s a pity it didn’t last.  Nations with socialized medicine—the only humane way to live—have handled the pandemic better than those that rely on health insurance at the same time its own government is trying to dismantle the only plan that would cover everyone.  Why do we find it so hard to care for the workers?  Maybe this Labor Day we can stop and think for a little while where we’d be without those who actually keep things going.  And maybe in November we’ll vote to help them out. 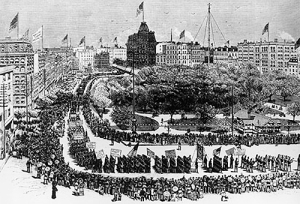 What Labor Day used to be; courtesy Wikimedia Commons