With all that’s been happening lately—as 2020 shudders along—we find ourselves at the equinox.  For some of us the weather has already been unseasonably cool, feeling like mid-October rather than September.  It stands as a reminder that the wheel of nature continues to turn, despite human foibles and plans.  Some trees have begun to sense the change and have started their winter fast while others keep their green to suck the last possible sugar from the sun.  Days have been getting shorter since late June, of course, but now the drama will increase until the winter solstice has us in the dark for much of the time.  It all depends on where you live, but for me the temperate zones have always been home.

I suspect our various predilections toward the oughtness of the world depend in large measure on what we experienced in childhood.  I knew winter before I ever experienced summer and the transitional seasons have always been my favorites.  The idea that we can take more time and reflect, it seems to me, mirrors what happens in autumn.  It’s cooler, so we spend time indoors a bit more.  Some years that doesn’t kick in until later, when the heat is on and there’s a coziness to a house that’s been left to nature’s fever all summer.  Windows are shut and locked.  Artificial warmth reminds us that we can find some solace inside.  Meanwhile the trees show us the proper way to face harsh conditions, and yet half a year from now we’ll be eagerly watching for buds.  The Celts, temperate zone dwellers, thought of this change as the wheel of the year, slowly turning. 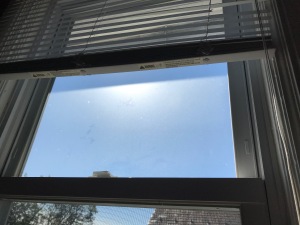 From where I sit in my study, with south and west-facing windows, I watch the path of the sun.  Having worked in a cubicle with no outside windows for years, I was always disoriented at the end of the day.  Now I can watch and begin to understand.  The difference is really striking if you have a single place from which to watch it unfold.  The sun is so much higher in the sky in July that it’s evident we’ve entered a new phase now.  Instead of being overhead at noon, the shining orb rolls more to the south, sending blinding rays directly through my window.  When it reaches the west (where it will, before long, sink before touching that window) I know the work day is over.  It’s no wonder our ancient ancestors kept this transition with holidays we’ve long sacrificed to capitalism.  I can still, however, see the changes and appreciate them for what they are.