I’ve seen it at last.  The cover concept for my book.  I’ve been manicly checking the Rowman and Littlefield (parent company of Lexington/Fortress Academic—a roadmap would be useful) webpage to see what it might look like.  I’ve “seen a sighting” at last.  Nightmares with the Bible seems to be actually happening.  As a writer there’s always some doubt involved with your book.  You wonder, will it really come out?  Will someone pull the plug at the last minute?  Is any of this real at all?  Those kinds of things.  I’ve mentioned before that waiting is a very large part of the process.  Publishing is a slow business and the world changes so fast.  I sincerely hope it doesn’t ever leave books behind.

My waiting hasn’t been idle, of course.  My next nonfiction book is well underway but I’m focusing on fiction at the moment.  I had two short stories published within the last month and I’m inclined to follow where some success shows itself.  Besides, fiction and nonfiction aren’t as far apart as is often claimed.  Seeing the cover of the book, however, nudges me back towards nonfiction a bit.  Since I’m no longer an academic it’s a toss-up.  A few colleagues like what I’m doing, but my fiction work is secret.  So the process continues, waffling back and forth.  It’s all in service of learning how the publishing industry works.  That’s one of the many things they don’t teach you in graduate school.

It’s October and I should be thinking about monsters.  Although I’ve gone through my closet of DVDs, there are many that bear watching again.  If only I could fabricate time!  One of the things I’ve noticed about this pandemic—and I know it’s not just me—is that time seems to have been swallowed up.  A simple walk down the local biking trail now requires masking up before and washing hands after.  Less than a minute of time, for sure, but it adds up.  And if you go after work there’s not enough light left to paint the porch by when you get back.  Such are the contradictions of this wonderful season.  You really can’t pin anything down.  The colorful trees put you into rapture then they’re bare.  The bright blue sky looms under relentless clouds.  You throw off your jacket one day and it snows the next.  And there might just be monsters lurking out there.  One of them, it’s said, will be released in November.  Given the nature of this season we’ll just have to wait and see. 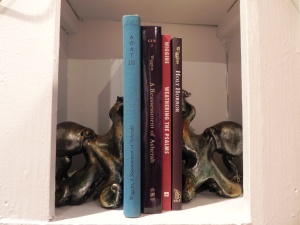