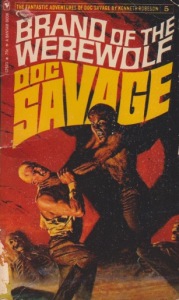 Over the past several years I’ve written quite a lot about childhood books.  Despite my ambivalence toward the internet, it has made it easier to find books from years ago.  Since one of my Modern Mrs. Darcy reading challenge categories was a book from my childhood, my thoughts went to Doc Savage.  I haven’t written much about the Doc on this blog.  I think I can understand why now.  Doc Savage, I suspect, was one line of inspiration for Indiana Jones, although the latter was much more of a hapless sort of adventurer.  Kenneth Robeson was a pseudonym mostly for Lester Dent, the author of many of the pulp fiction stories about Doc.  As a forerunner of the superheroes that were shortly to appear, Savage was a “Mary Sue”—a literary character with no faults.  The stories were originally written in the 1930s and ‘40s.

As a child I read many of these novels, beginning in sixth or seventh grade.  I recently found a used copy of Brand of the Werewolf, which I read as part of my challenge this year and I was embarrassed by what I found.  Not that Doc’s perfection came as a surprise.  No, my embarrassment was at the racial stereotypes that were so blatantly on display.  This particular story caricatures African-Americans, American Indians, and Spaniards.  It does so unselfconsciously with an air of entitlement that made me ill.  Sure, all characters suffer by comparison to Doc Savage, but those who aren’t “white” (or bronze, in context), are throw-away characters.  Unless, of course, they are pretty girls.  If so we’re reminded every time that they are pretty.

No wonder our culture remains so intolerant of difference!  Here the default human being is the white male.  Even Doc’s female cousin (pretty, of course) doesn’t really help at all.  The entire scandal is uncovered and resolved by the white man.  I realize that I might be putting too much stress on a pulp that just can bear much weight, but I do wonder about how such stereotypical messages, repeated decade after decade, blend into the cultural stew in which we all soak.  I was by no means the only tween reading these books in the 1970s, some three or four decades after they’d been published.  A friend of mine got me started on reading them, and they were still popular books at the time.  We need, it seems, to be aware that our prejudices will live on in our words after we’re gone.  And after all that there wasn’t even a werewolf in the book.  Childhood memories are sometimes unclear.

One thought on “Savage Doc”