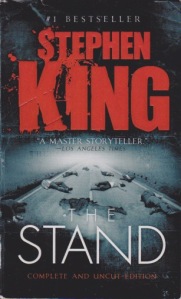 Investment.  Time is an investment, and I recently invested in Stephen King’s The Stand.  You have to realize that I made this decision sight-unseen.  More than one person whose opinions I value told me I should read it.  I had no idea it would be 1,400 pages and would dominate my life for a solid month.  Still, I’m glad I read it.  In case you haven’t, and intend to, there may be some spoilers below.  This is one of the King books I read without knowing the plot or the ending, so if you’re in that boat, skip a paragraph or two.

I hadn’t intended The Stand to be plague reading.  It just turned out that way.  The book is about a variety of flu that kills nearly the entire population of the world.  It’s only at the very end that you learn it’s a parable.  The ending also explains some of the apparently unrelated filler that makes the book so terribly long.  In any case, after wiping out much of the world, the story narrows down to several of the survivors and how they end up dividing into two camps: those who want to cause misery (think Republicans), and those who want to reestablish civilization.  Of course there are several unpleasant instances along the way.  The camp of violent ne’er-do-wells settles in Las Vegas under the demonic leadership of Randall Flagg—his identity only becomes clear at the end—while the good guys, under Mother Abagail, choose Boulder.  A confrontation is inevitable and when the smoke clears we learn that Randall Flagg is, essentially, civilization itself.  Perhaps Christianity.

Of all of the Stephen King novels I’ve read, this one has the most overt Christian imagery.  In fact, in his introduction to the expanded edition he refers to it as a “long tale of dark Christianity.”  There’s quite a lot of theological dialogue along with gruesome deaths.  The pacing often makes the story seem quite long.  Well, it actually is.  I suspect it was this Christian imagery that had friends recommending it to me.  The idea that evil is essentially our culture that comes around and kills us is both profound and paradoxical.  As well as “Christian.”  All along the good guys want to reestablish the cooperation and comforts of civilized life.  It was “civilization” that unleashed the killer virus, however, and herein hangs the tale.  I’m glad to have read it, and I have to confess that I miss the bleak world King created, after living with it for so long.  And it turns out to have been plague reading both literally and symbolically.

One thought on “Still Standing”