Translation. The Bible as we know it would not exist without translation. Ours is a culture of convenience — Americans want divine revelation dished out in easy-to-swallow portions in their own tongue. Going through the rigors of learning new alphabets and grammatical systems, not to mention the eerie specter of textual apparatus, are enough to frighten off all but the most stalwart of truth-seekers. This is a good thing. We would never advance as a culture if we all had to spend our time learning actually to read our religious texts as they were written, only to find out that we have no original texts at all. So we trust our translators.

A few weeks back I posted an entry on Andrew Schlafly’s misguided (imho) Conservative Bible, devoid of liberal bias. Since then Stephen Colbert’s interview with Schlafly has been making its rounds on the internet and thousands of people are now aware of the project and its biases. I stand by my original objection that biased translations are unfair representations of the actual ancient texts. But it looks now like I’ll have to be eating crow. A new translation is scheduled to arrive in stores next month, and it looks like it may have a bias. Still, it is a translation that no internet-savvy reader can afford to ignore. Yes, the Lolcat Bible is nearly ready to pounce from the press.

The culmination of the Lolcat Bible Translation Project, over two years in the making, a Bible in Lolspeak will soon be available. Comparing what I’ve seen of the two projects, I think there is more truth in the Lolcat Bible than in the Conservative Bible. I’ve studied more ancient languages than any sane person rightfully should, but I do rely on my able research assistant (aka daughter) to help read Lolspeak. She suggested the title for this post, but the full text reads, “Im in ur blogz, postin mah wurdz of wizdum.” That’s straight from the mouth of Ceiling Cat! 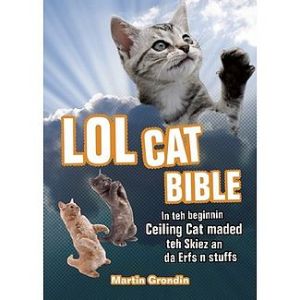 5 thoughts on “Im in ur blogz”