Our local parks and recreation department has a Christmas tree recycling program. While trees are biodegradable, it always seems crass to me to take such a symbol of joy, hope, and anticipation and have it just thrown in the landfill. The local trees are recycled into mulch, and those who own their homes are free to help themselves to the giant pile of finely chipped pine that smells like the north woods just minutes from Manhattan. The strange part is transporting a dried, outdated tree through town to the drop-off point. Pedestrians and other drivers stare at a car with a tree strapped to the top a few weeks too late for anyone’s holiday. They may find it just a little disorienting: why would someone be taking a dead tree out for a drive? It is not how we’re accustomed to seeing it done.

Perceptions, even if entirely artificial, see us through each day. Some continue to argue that perceptions are indeed reality. When we see something mildly disconcerting, we might ask what is happening. A familiar character in an unfamiliar costume is a trivial sort of dissonance, but it is enough to raise perception to a conscious level. We all know the accepted color scheme, so what (other than bad photoshopping) is going on when the Enterprise crew swaps shirts?

The issue is, however, a serious one. Many of the troubles we experience in society are based on fictitious certitudes. It is a strange human trait that me may not know why we believe something, but of that belief we are dead certain. From an absolute perspective, we have no way to determine which way space is oriented. If we see a globe facing “the wrong way” the dissonance drives us to correct that misperception. North, south, east, and west are relative terms. They are models that we overlay on our universe. Which way that universe actually tilts is anybody’s guess. Freshly hewn pine trees atop cars are common in December. When such things transpire in January, many people, to guess from the stares, believe their world has somehow gone askew. 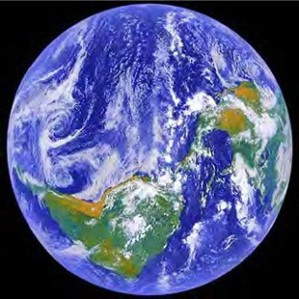 Which way is really up?