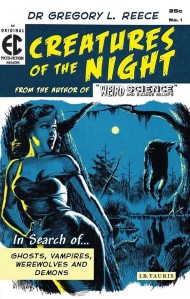 Gregory L. Reece’s Creatures of the Night is a strangely profound book. I picked it up to read on the plane home from Chicago and I wasn’t disappointed. Promising to explore ghosts, vampires, werewolves, demons and devils, Reece suggests that maybe the key to such fascination rests with the late Rudolf Otto. I had over a decade of students read Otto’s famous little book, The Idea of the Holy. Otto, whose palindromatic surname suggests something uncanny, characterized the holy as the fascinating mysterium tremendum, the wholly other. (I will refrain from calling it the wholly holy.) The mystery that makes us tremble. The monsters that haunt our nights and imaginations are aspects of this utterly other.

Along the way Reece proves an able tour guide. He recognizes, as I have repeatedly stated in this blog, that religion and fear are conjoined twins. He also knows how to get your skin crawling. For Reece there is no question that such things are real. Real doesn’t mean that they are physically lurking outside your window at night—for who is to say that only the physical is real?—but they are as real as religion. No doubt strange things have transpired in history and continue to occur. And the reason we go into church may ultimately be the same reason that we watch a horror film.

As Reece comes upon the topic of demons the air in the room (or plane, or bus) thickens. Here we have documented accounts of impossible events. No amount of rational training can remove the shudder from these stories. Explanations of epilepsy only go so far before terror takes over. By herding them together with vampires, werewolves, and ghosts, Reece stakes his claim that they all are real. Rational reductionists may shrink our world down so tightly that no room appears in the inn for our creatures of the night. But those who are honest, even among the reductionists, will admit to a mysterious tremor, even if unintentional, on a dark and stormy night.

One thought on “Creature Feature”