In a post on the Huffington Post recently Michael Zimmerman, founder of the Clergy Letter Project, wrote about the strange antipathy of Ken Ham to the search for extraterrestrial life. Ham, founder of a creationist museum and self-appointed spokesman against evolution, has gone on the record saying that aliens cause problems for a creationist worldview. Therefore they can’t exist. Indeed, creationists should reject aliens because of the flat earth the Bible presents. Zimmerman, with his usual unfailing reason and wry humor, demonstrates the multiple difficulties both with Ham’s understanding of science and of the whole alien agenda. The Bible doesn’t address the modern world on many fronts, which is why literalists so often find themselves out of step with the issues of the day. When the final period (an anachronism, I know) was placed at the end of Revelation, it was expected that the world wouldn’t be around much longer, tottering as it was on the underground pillars that held it up. Somehow the Roman Empire came and went without any kind of cataclysm ending it all, and literalists have been backing and filling ever since.

Ham’s angst about extraterrestrials, however, is not shared by all Fundamentalists. I recall going to a session way out at a country church as a child where the guest speaker, a firm believer in aliens, talked about the “sheep in other folds” referred to by Jesus as aliens. I recall the eerie feeling as we drove home under a dark sky with fliers depicting flying saucers and assurances that we were not alone. In college, when I discovered Larry Norman’s music, I was struck by his lyric “If there’s life on other planets, then I’m sure He must know, and He’s been there once already, and has died to save their souls.” Literalists, like Catholics, take multiple views on the question. It seems a terrible waste of space if, in this infinite universe we’re the only sparks of consciousness around. I’ll leave “intelligence” for time to decide. 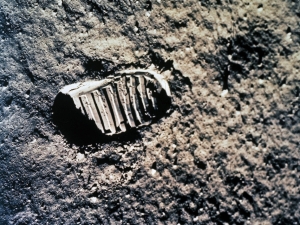 What would Genesis do?

Ironically, Ken Ham doesn’t seem to have considered the up side of aliens, at least for his point of view. If the extraterrestrials end up looking like us, that does raise some serious questions about evolution. How did it work identically on two different planets to produce such similar results? You’d think maybe Fundamentalists might welcome aliens with open appendages. Of course, some have gone far off the other end and declared that angels and aliens are the same thing. The problem of the literalist world view is that it is severely limited. The Bible never foresaw the internet or the airplane or even the true nature of our own solar system, let alone the infinite sea of space beyond. In charting a course for belief, accurate maps are necessary. As Zimmerman points out, those maps, of necessity must contain the stars. And as we continue to evolve infinite worlds of possibilities await.