Sometimes the media gets it wrong. If one were to believe in the tales of industry prognosticators, our libraries would be closing, we’d all own Kindles, MOOCs would have replaced expensive college courses, and New York City should still be shoveling out from the worst blizzard since the Ice Age. We thrive on extremism. Although I don’t regularly read the newspaper (who has time?), the internet makes news memes available just as they happen and I feel somehow cheated if I have to wait more than an hour for trenchant analysis of an event I’ve just witnessed. Still, the publishers haven’t all shut their doors yet, colleges are managing to stay afloat, and libraries can be happening places. This became clear to me when I recently attended an event in the quaintly named Old Bridge Public Library. It was a Saturday, the time of the week when the gripping fingers of employers feel their weakest. Although I saw no evidence of an old bridge anywhere, I made my way through the traffic to the library where I met with a surprise—the place was crowded! 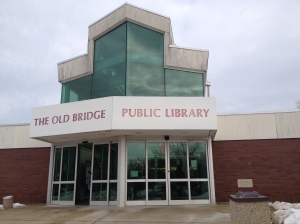 For those of you not fortunate enough to live in New Jersey, Old Bridge is probably best considered a satellite of New Brunswick, home of Rutger’s University stadium. (I think there may be a university associated with it too.) That is to say, it is an urban area, and any antique structures to convey one across the water have long devolved to only nomenclature. Like anything in north-central New Jersey, it’s not far from New York City. When I arrived for my event, the parking lot was already full. It was not because of the event, either. Less than 20 showed up for that. When I went inside I found the library a veritable hive of activity. And it wasn’t just lonely, homeless people trying to get out of the cold. Families with kids, people with their grandparents, even other middle-aged adults like myself, all found their way to this island in the sea of a municipal complex not walkable from anywhere. I left encouraged.

Yes, the world of books and education is changing. Publishers feel stress, but that stress mostly has to do with predicting the best form to provide for content. Self-publishing has become a phenomenon, but many know that the self-published book has a difficult life in front of it. Libraries, however, are not the graveyards we’ve been told that they are. We need repositories of information that isn’t on the internet. And more importantly, we need places where, although the librarian shushing us may be iconic, we can get together with like-minded individuals and truly educate ourselves. I do sometimes tremble when I think of the future. The values I acquired as a young person seem, at times, on the verge of extinction. I learned that when this seems to weigh too heavily on my mind, I need to head to the nearest public library and support the old bridge to knowledge.