If it weren’t for friends sending me little nuggets they find on the internet, I might be uninformed about much of the weird and wonderful world unfolding around me. With hours not spent at work being laid out on spartan public transit, I don’t have much time for surfing. So it was that I watched this video of St. Patrick trying to explain the Trinity to a couple of normal Irish blokes. Of course it’s funny, but as I watched it, a thought occurred to me. I used to think what a waste it was for learned minds to sit around arguing the fine points of theology. The Trinity is a prime example—three is one but not really one. Form, substance, essence, accidents or effects? What is it that makes them distinct yet not? It is, of course, a logical impossibility. Yet hearing words like modalism and arianism made me realize that these were highly sophisticated concepts. They were developed in Late Antiquity in a world with quite a different frame than our own. Atheism probably existed then, but it was very rare. What we might call naturalism did not exist. Some kind of deity or force was obvious behind the natural world.

To be sure, some thinkers had already suggested that the earth was round and that laws of mathematical precision governed aspects of nature. The frame of the human mind, at the point when engineers can construct pyramids and ziggurats, had already reached the point of science. What do you do with science when gods can’t be dismissed from the picture? Naturally, you turn your science on the gods. Although many today would argue that if God exists, the deity is a being (or concept) outside the realm of science. Science deals with the material world, not with supernatural possibilities. Dividing a single deity into three persons without making yourself a polytheist is a real mental puzzle. The concept of the Trinity isn’t biblical, although the basic ideas are derived from the Bible. It is a purely theological construction to explain how Jesus could be God and yet die. Well, it’s more complicated than that.

One of the great joys of the angry atheists is to point out the obvious frippery of theological discourse. How many angels can dance on the head of a pin? Why would anyone waste their time on such nonsense? Yet, the thinking behind early theology was exquisitely rational and highly developed. One might almost say “scientific.” The people of antiquity were not stupid. Our mental picture of the Middle Ages is often of unwashed louts chasing witches and hiding from dragons. Their society, however, was advanced by the standards of hunter-gatherers. The technology of the day may not have reached down to the level of the everyday worker, but human thought, ever restless, was working its way toward a scientific revolution. And God tagged along. Even Sir Isaac Newton gave a nod in that direction. While theological arguments may have outlived their usefulness in a society such as ours, they did represent, in their day, the best of rational thought. And in their own way, likely contributed to the birth of what we know as science. 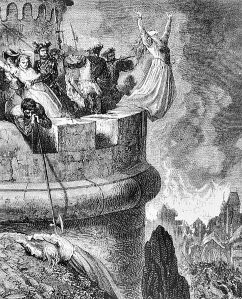 The fate of heretics