Can you name your state insect? State bird? State dinosaur? The concept of united states, perhaps more obvious in Europe where languages differ, is a complex one. In the United States of America we’ve got our culture wars that generally divide along predictable state lines, but each state has a mix of progressives and conservatives, and caricatures may be funny but are hardly accurate. In this jambalaya of divergent ingredients, each state develops its own image in keeping with a couple centuries (for some) of tradition. We even have quarters that show our distinctive features on the reverse side! As one of those whose profession (whatever that is) has moved me across state borders periodically, I know that choice of domicile often depends on what it might offer by way of employment. Although one of my parents was born in New Jersey, I moved here not out of family loyalty but out of desperation to find work. Nearly every day I cross a state border to get to a job, but it feels pretty much the same to me.

Although I’ve lived in these states for nearly half a century (some of my years were spent abroad) I didn’t know that states had a choice of books. I don’t know if every state has a book. It saddened me to hear that New Jersey rejected “Born to Run” as state song since it was about trying to get out, but I don’t know if we have a state book. The Godfather, perhaps? Moby Dick? When NBC announced that Tennessee had its proposal to name the Bible as its state book shot down, I was a bit shocked. What is a state book? Tennessee, which (as a caricature) still takes pride in the Bryan side of the Scopes Monkey Trial, often leads the way, like Davy Crockett, against the untrusted, heathen other. The undiscovered country of modern thought. The Bible can be a comfortable book in that way.

The Bible justifies our prejudices. Written mostly by white men who believed they were specially chosen by God, well, is it any wonder that it bestows a sense of entitlement? Radical in its time, the Bible now stands for status quo ante, ante meaning before women and non-whites won the right to be considered equal. It is a kind of Paleolithic justice. A caveman ethic. What better way to demonstrate that your state, like Indiana, is a special haven of the Almighty? Only here can the truth be found. If you’re looking anywhere this side of 1611 you’ll miss it. We don’t need to know what came before. Protestants, now partnering with conservative Catholics when it fits the political agenda, have always recognized book over state. We the people and all that. I really do wonder, can you name your state dinosaur? 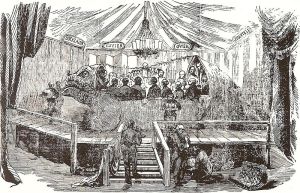