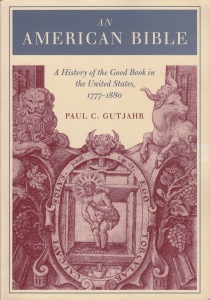 One thing that would be difficult to overstate is the influence the Bible has had on America. In our increasingly secular society, it may seem like the Bible has lost its edge. Then comes a presidential election and the Bible is headline news again. Actually, it is present all along in more subtle forms, causing embarrassment for those who think it’s just puerile mythology. Many useful aspects of this may be glimpsed in Paul C. Gutjahr’s An American Bible: A History of the Good Book in the United States,1777-1880. Thorough, insightful, and at times even witty, this reader-friendly analysis probes many aspects of how the Bible has impacted society in ways long forgotten. Who remembers that there were “Bible Wars” in the nineteenth century? That Bible publishing could at one time make one wealthy? That Bible illustrations caused scandal because bare-bosomed biblical ladies appeared in the pages of sacred writ?

The Bible is America’s book. Although Gutjahr only covers about a century of the story, there’s no question that the Good Book has roots that reach down into the sixteenth century and branches that continue to sprawl into the twenty-first. Some of it may be chalked up to civil religion, but the whole picture is more complex than that. From earliest days the colonial invaders drew on their understanding of the Bible to justify actions that really can’t be justified, and assuaged their guilt with the same holy book. Medieval European culture held the church and its founding document in high esteem, and when the Reformers broke from the hierarchy, the Bible became, well, sola scriptura. It was the Protestants who were annoyed enough at the situation to seek a life in somebody else’s land.

Once here, however, the Bible became foundational. Schools were established to teach students to read, and the main reading material was the Bible. A moral society, it was believed, would be founded on such curricula. Colleges were built primarily to train ministers. Revivals periodically swept the land. We currently live in the days of mega-churches. The elites sometimes overlook the appeal of the Bible to the average person. Here is a book that offers hope. And even if it’s rough, a love to those who don’t get their share of the culture’s spoils. It is more than a book. The Bible is a symbol. On his inauguration George Washington not only laid his hand on it, he also kissed the Bible before the crowds. If, like me, you didn’t know that, I suggest An American Bible as a reminder of how it has brought us to where we are. Borrowing a term from its sub-title, it too is a good book, and it serves to remind us of the power of an idea.