I admit to being a relative stranger to contemporary commercial television. We don’t have “triple play” at home, and since the internet provides more information and entertainment than one person can possibly handle in a lifetime, why pay extra? On a visit home, however, where internet does not yet exist, I fell to the default of watching TV. Scrolling through the cable channels available in this small town, I start to understand why we don’t pay extra for this at home. Much on offer appeals to the lowest common denominator, and although some educational programs exist, they have to put somebody in danger in some remote location in order to draw the viewers in. Then I stumbled on Mysteries at the Museum.

For those of us hopelessly enamored of the past, museums are an irresistible draw. I joined the program already in progress. It was talking about Stroudsburg, Pennsylvania, through which we’d driven to get here. A resort town in the Poconos, I always think of Stroudsburg as a traffic bottleneck, particularly on a holiday weekend. Instead the story was telling of a haunted jail in which a prisoner had to be exorcised after it was found that he could make it rain inside his cell. Then the name of the Warrens was mentioned. The Bible used in the exorcism is from their occult museum (thus the tie to the title of the program). Ed and Lorraine Warren, as my regular readers know, get mentioned here every once in a while. Real life ghost hunters, they kept a museum of the occult in their Connecticut home. I’d missed the part of the program where they revealed the provenance of the artifact. Now things started to make sense. After the commercial break, however, the story shifted to a historic pair of hiking boots. 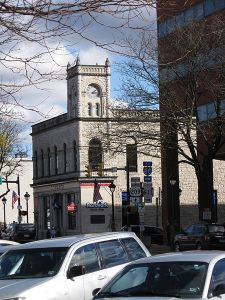 What was so striking about this brief segment of the show was not the implied credulousness of the investigation, but rather the certainty with which those interviewed declared this was a water demon case. Okay, so I’d just finished a seven-hour drive and I may not have been at my sharpest, but where did such certainty come from? Who were these experts telling us what had happened? I’ve read enough of the Warrens’ accounts to get a sense of how they worked, but not even the name of the priest was presented, let alone that of the demon. What we had, then, in this 15-minute segment, was a Bible and an anecdote of rain falling in a Stroudsburg jail. As I switched off the program to go to bed, I knew that I’d find the missing information on the internet. Even without triple play.

One thought on “Night of the Museum”