They say ten city blocks are a mile. They also say the internet is fast. Putting these two theorems to the text, I’ve logged several foot-miles in Manhattan to find things that aren’t there. I don’t mind the exercise, but apparently the web can’t keep up with Midtown. I’ve been working in Manhattan for going on seven years now. I very seldom leave the office during the day, eating at my desk and trying to give the man his due. Once in a great while there’s something I’m either compelled to see, or that I must find for various reasons. Almost without fail, such lunchtime expeditions lead to frustration. I recently had to visit a business that shall remain nameless (conflict of interests, you see). According to Google Maps it was a mere ten blocks—a mile—from my office. At a brisk pace I could make it there, transact my business, and return to my cube all well within an hour. As I grew close, I got that sinking feeling I recognize now as internet ghosting. Nothing remotely like my goal was at this location. 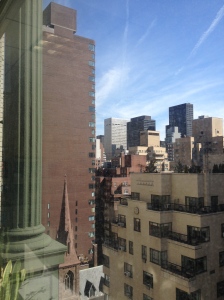 I walked in and smiled at the man at the security desk. He was even older than me. “Ah, they used to be here,” he said, “but they left a long time ago. Long time ago.” Apologizing in advance, I asked if he had any idea where they might’ve gone. “I heard they moved across from Bryant Park, on 6th Avenue. But I heard they moved from there, too. You might try it, though.” Since this was roughly in the direction of my office from where I was, I decided to swing by. When I worked for Routledge I went by here every day, and I didn’t recall ever seeing this particular business there. Their security guard was equally as friendly. “I’m afraid there’s nothing like that here.” I had to return to work. When I got back to my office and googled their store locator, the website froze. This was truly unobtainable via the internet.

Some times you’ve just got to let your feet do the walking. Things aren’t always where the internet says they will be. I’ve come to realize that New York City is constantly changing. Buildings now stand where mere holes in the ground used to be when I began working here. Commuting in daily all these years is like time-lapse photography of a plant growing. Buildings emerge behind the green plywood walls, and next thing you know what used to be a synagogue is a new retail opportunity. It may not, however, be the business you’re looking for. Before spending your lunch hour walking a mile to get there, you might try calling first.