It’s a matter of scale. If you read this blog chances are you like books. If you like books you probably know about remainders. When you walk into a bookstore and see a shelf or section of really cheap new books, you’ve found the remainders. This happens when a publisher overprints and, instead of pulping books (that hurts even to type!) the remaining stock is sold at just above cost so that retailers can add a small markup and make a marginal profit. Most authors don’t like to see their books remaindered, since it means demand wasn’t as high as the publisher anticipated. Expectation was that the book would do better than it did, now the publisher and bookseller just want to recoup some of their losses. Often there’s a marker stroke across the bottom pages of the book so you can’t return it for the retail price. 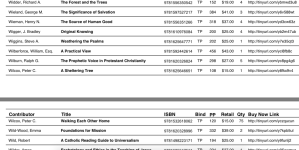 For those of us whose books sell in the double digits, seeing yourself on a remainder list would be kind of a thrill. The other day I looked at Wipf & Stock’s 50 percent off sale to find a copy of Weathering the Psalms listed. Probably it was overprinted for the AAR/SBL annual meeting, since I saw that they did have copies there again last November. If they hadn’t bothered to print out a bunch, I would never be on the remainder shelf in Eugene. I don’t mind because I’m in good company. Looking at the list I feel like I belong in some kind of academic crowd in the reduced bin. There’s a sense of community among the overprinted.

Turnabout, they say, is fair play. I’ve bought plenty of remaindered books in my life. Lately I buy used academic books because the new editions are out of the reach of an independent scholar who isn’t independently wealthy and who doesn’t have access to a university library. If I buy others cheaply, I turn the other page and expect the same back. Most of us who write academic books aren’t in it for the money. We want to be remembered for our contributions to the discussion. We took the many months and years it takes to research, write, and polish a book, and we want others to take an interest in what we have to say. It’s all about the dialogue. It’s all about the community. For those of us who never really found a home among the established academy, publication can mean a lot. It doesn’t matter that the books are sold cheaply—in fact, that’s good, because it means somebody might just read what you wrote. It’s all a matter of scale.