Apotropaic is a word that can be translated as “turning away evil.”  For all that, it’s a perfectly good English word, although seldom used outside realms such as religious studies and anthropology.  Although the word itself may be unfamiliar, the concept is one that everyone recognizes—the charm that wards off evil is the most common example.  The rabbit’s foot means good luck (except for the rabbit) because it’s an apotropaic device.  In perhaps one of the oddest twists in Christianity’s somewhat lengthy history is the fact that the Bible itself has become an apotropaic device.  You’ll see this quite a lot in horror films, and if you read Holy Horror when it comes out you’ll see it quite a bit, although I don’t use the technical term for it.  Apotropaic outlooks also pervade society as a whole.  A recent article on Mysterious Universe proves the point.

Pennsylvania is a weird state.  Having grown up here, I know that to be the case.  In Wilkes-Barre (which itself is a strange name) a ghost-hunter was arrested for breaking into a haunted house bearing a sword, shotgun, and Bible.  That should cover your bases.  Of course, I couldn’t help but notice the odd equivalence of these three weapons.  One is intended for close combat (the sword), one for a reasonable distance (the shotgun), and one for an enemy so close that they might get inside (the Bible).  Make no mistake about it; the Bible is indeed a weapon.  Probably intended as an apotropaic device in this context, it was nevertheless an object to defend the ghost hunter from evil.  The sword and shotgun, however, seem to betray a lack of trust in Holy Writ. 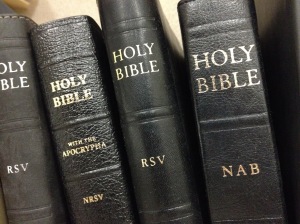 The Bible has been used for offensive purposes ever since people figured out that it can be used to control others.  Coercion, in whatever form, is a kind of violence.  Interestingly, reading the Good Book would seem to indicate that such usage of holy things is inappropriate.  Then again, the Bible doesn’t refer to the Bible.  The idea of Scripture as a powerful object developed only after the Good Book had become an iconic object.  The final authority.  Who can argue with what is claimed to be the word of God?  That idea has become more important than what the Bible actually says, as any “Bible-believing” Trump follower will prove.  Against ghosts, however, it might serve as an apotropaic device, but it won’t prevent you from being arrested, it seems.  A lesson worth pondering.