Call me nostalgic, but growing up Fundie, “Capernaum” tripped easily off my lips.  In fact, it was a word I heard very frequently at church, always pronounced “kap-er-NEE-um” (please pardon my amateur phonetics).  Even though no one I knew had ever been to Israel, we all knew it was in Galilee and that it figured large in the early life of Jesus of Nazareth (although we assumed he was surnamed “Christ”).  When I attended seminary I was surprised to hear the geonym pronounced “ka-per-NUM.”  It sounded so sophisticated—aristocratic, even.  Still, everyone at Boston University School of Theology knew what, and roughly where, it was.  It was a household name, no matter how you pronounced it.

Spellcheck disagrees.  It doesn’t recognize one of the most famous places in the New Testament.  Now, I’m aware that my view of things is idiosyncratic.  This blog should be proof of that.  Those who grow up from Fundamentalism often know this experience—something that everyone knew when you were young and informed is arcane knowledge to the rest of the world where Kardashians and Sedarises are household names.  The Bible, irrelevant at best, is a foreign country.  Then the religious right comes to power and everyone’s confused.  They don’t speak the same language as the rest of the world.  They say kap-er-NEE-um.  Others scratch their heads and glance at their knee caps. 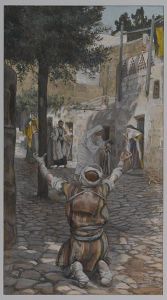 When I visited ancient Capernaum it required some imagination to reconstruct what it had been, back in the day.  Since the ruins were relatively recent—only a millennium or two—some of the buildings were still above ground, including the famous synagogue.  Even among the unchurched archaeologists, everyone knew the connection of the city to Jesus of Nazareth.  That doesn’t mean, however, that the programmers responsible for spellcheck recognize the name.  Kardashian doesn’t get a red underline on my word processor.  Even in the first century, however, Galilee was a backwater (with real water!).  Important people came from big cities and had family connections.

Some things don’t change much over the millennia.  The famous often find their spotlight because of connections.  If the deity decided to incarnate today, s/he’d know to get a website put together first.  And it would help to have some product endorsements.  Even salvation at a click isn’t enough to draw most people in.  Of course, the matter of name—excuse me, “brand”—is important.  More than anything, you want something people can pronounce.  And just to be safe, anchor it to either New York or the city named The Angels.