I’m a stomach sleeper, if that’s not TMI.  This began many years ago when I realized that upon awaking from nightmares I was always on my back.  I started doing what I knew was dangerous to infants, safe since I haven’t been part of that demographic for decades.  Terrazzo isn’t one of my favorite sleeping surfaces, however, and on my back on the floor of Newark’s Liberty Airport I realized I couldn’t roll over, for many reasons.  My glasses, for one thing, were in the internal pocket of my Harris Tweed.  For another, on one’s stomach one’s wallet is exposed in a way that’s maybe too inviting.  Before suggesting I could’ve placed my wallet and glasses elsewhere, let me write in my own defense that rationality isn’t my strong suit after midnight. 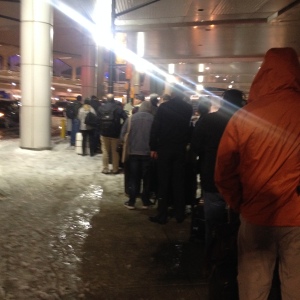 I found a spot next to a set of escalators where the constant thrumming alternately kept me awake and soothed me to nod.  I heard many languages spoken as I drifted in and out of consciousness for the few hours I had to wait for dawn.  And nobody disturbed me.  This is rather remarkable—a person asleep is a vulnerable being.  Doing it out in public with no private walls was a new experience for me.  I don’t sleep on planes, buses, or trains.  Or, until two days ago, airports.  It brought to mind the biblical world.  A town was considered a righteous place if a stranger could sleep unmolested in a public place.  The traveller—please take note, United—was in need of special consideration.  My situation revealed something unexpected about Newark Airport. 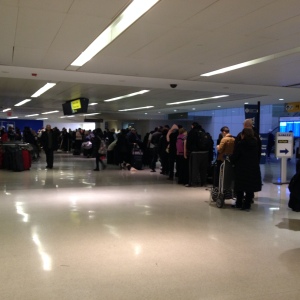 It was full of angry, frustrated people.  I opened my eyes at five a.m. to find a very long line snaking down the corridor behind me—a queue that had been there when I first drifted off.  These were people trying to reschedule flights since United couldn’t bump that day’s passengers because they’d decided not to fly out the night before.  Despite the weariness and intensity of emotions, there was very little bad behavior.  We were biblical strangers, mostly in the same circumstances.  No creature comforts, no privacy.  An east Asian woman said the next morning that in her country the airline would’ve brought food, and blankets at least.  In the United States fiscal concerns reign supreme, however; do you know how much it would cost to care for all these stranded people?  When I opened my eyes the situation was about the same as when I closed them.  I couldn’t help noticing I awoke on my back.