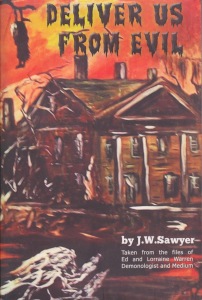 Ed Warren died in 2006, effectively ending the cooperative ghost-hunting venture with his widow Lorraine.  The Warrens rose to prominence after being among the first to investigate what is now known as the “Amityville horror.”  Not being writers, the Warrens hired those more talented in the literary arts to recount some of their more famous adventures.  Their books were a hot commodity in the 1980s, selling well through commercial publishing houses.  These accounts then went the way of out-of-print books, settling into used bookstores and attic corners.  With the release of the horror movie The Conjuring, these titles came back into demand and enterprising publishers licensed the content in order to resurrect the books.  The latest effort was Deliver Us from Evil, written by J. F. Sawyer and published after Ed’s death.

Now, if you’ve been following the thread of my posts on these books you’ll know they were never belles lettres to begin with.  Many of them are disturbing to read, regardless of whether you believe in the supernatural or not.  Deliver Us from Evil, which is subtitled True Cases of Haunted Houses and Demonic Attacks, reads like a collection of juvenile ghost stories.  Unlike many of the other books in this informal series, it doesn’t go into detail of how the Warrens investigated the cases.  Although it doesn’t state this directly, it seems that since Ed couldn’t narrate the procedures and outcomes, the stories are simply left to stand on their own.  There isn’t much glue between them and the accounts themselves, which occasionally eerie, lack the conviction that a self-convinced Ed apparently gave to the other exemplars.

Since my follow-up to Holy Horror (which just arrived on my doorstep) deals with movies about demons, I have been eager to read the entire Warren oeuvre.  There are two remaining books, as far as I’m able to determine, and one has become a collectors’ item and is priced that way.  This is, it seems to me, an odd but working-class way to do research.  Books, even if not by academic publishers, are part of the public record, and as such, deserve consideration of some kind.  Yes, many books can simply be dismissed.  Nobody has time to read them all.  Nevertheless, it’s true that to be informed a researcher should put aside prejudice and see what the public record states.  Deliver Us from Evil was a quick read from that record with no real plot and a kind of haunting ending.  I wonder what Ed would’ve thought.