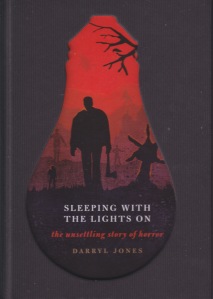 Late one night in Wisconsin—I had just come off the train from Champaign-Urbana—one of the students from Nashotah House was driving me to my spooky apartment on campus as part of his work-study job.  He mentioned what seemed an obscure topic to me, and I asked him why he liked it.  “Who can say,” he responded, “why they like anything?”  He had a point.  Work on Nightmares requires reading current studies of horror, and one that came out just before Halloween was Darryl Jones’ Sleeping with the Lights on: The Unsettling Story of Horror.  I don’t know why I like such things, but when the book was first announced I knew I’d need to read it, and soon.  It had to wait until the Warren books were finished, however.

This little gift book (with a novelty cover, even) contains quite a bit of insight.  In fact, while reading it I discerned that Jones had spotted something that I’d begun to write down independently.  Horror does that to people.  The book is divided up into chapters addressing different genres of monsters and analyzing why they have proven so popular with both horror authors and auteurs.  The discussion is lively and even witty at times, as befits a topic that most people really misunderstand.  I myself used to misunderstand it—I went through a terrible period of repudiating the things I liked when growing up (who could say why?).  I jettisoned my interest in the Gothic even as I visited ruined castles in the Scottish highlands, and thought that horror was something best left to the uneducated.

One of the realities of my own life—perhaps some of my readers will find it true as well—is that once you’ve been put through the mill once or twice your mind starts going back to childhood in what may be a vain effort to start all over again.  The likes of your youth come flooding back—this is why I began reacquiring Dark Shadows novels.  They aren’t fine literature, but they were one of the guilty pleasures with which I grew up.  As Jones notes, vampires are one of the most enduring of monsters.  He suggests that Bram Stoker’s Dracula was among the notably influential books of Victorian English literature.  As Jones points out, there are people who back away from him when he tells them he studies horror.  He also makes a clear case for its enduring connection with religion.  I might add as a coda here, that telling people you study religion often gets the same response as telling them you study horror.