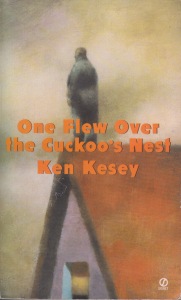 When my daughter was in middle and high school, I made an effort to read every book she was assigned for her English classes.  This gave us something to talk about during the years when many teens grow laconic and uncommunicative.  Some of the books I’d read before, but one frightened me off.  Ken Kesey’s One Flew Over the Cuckoo’s Nest pressed the wrong buttons.  You have to understand that I saw the movie for a class in college.  It disturbed me.  Even before encountering H. P. Lovecraft, one of my deepest phobias was insanity.  Children of alcoholics sometimes fear those who are out of control, and mental patients had become, in my head, associated with the non-rational behavior of my father that frightened me so.  During a clown ministry event we visited the local state hospital for mental patients.  I trembled for about a week after we left.

One Flew Over the Cuckoo’s Nest is in many ways a sixties novel.  One reflection of that is the fact that the religious imagery in the novel is presented in the form of punishment.  Everyone knows the narrative of R. P. McMurphy’s battle of the wills against Nurse Ratched.  The latter uses electroshock therapy as punishment and she tries to wear McMurphy down by using it repeatedly after the fight in the shower.  The electroshock table is described as a cross.  The metal headset is a crown of thorns.  Indeed, one of the patients is described as being crucified to the wall of the ward where he hangs throughout the novel.  The sixties frequently saw religion—especially the staid, conservative evangelicalism of the 1950s—as a form of punishment.  That’s pretty clear here.

Although the novel celebrates the freedom of the sixties, it also reflects the prejudices of the times.  The African-American attendees on the ward aren’t portrayed sympathetically.  The women—nurses and prostitutes alike—are there for the pleasure of the male patients’ gaze, exemplified in the leering laugh of McMurphy.  Still, there’s a kind of catharsis to this tale.  The Chief, from whose point-of-view the story’s told, is arguably cured by the antics and special attention McMurphy shows him.  Beneath the callous, self-serving conman there is a human decency that “the system” fails to find.  Indeed, McMurphy is a kind of Christ figure.  A fallen savior, no doubt, but a liberator nonetheless.  This was a difficult novel to read.  I couldn’t make myself pick it up half-a-decade ago, but I suspect somewhere beneath the surface I’m glad I’ve finally read it.  It didn’t cure any of my phobias but it made me think.

1 thought on “Prejudices of the Time”