We get along in life, I believe, by routinely ignoring the rather constant dangers that surround us.  Oh, we’ve taken care of the larger faunal predators, but we’ve replaced them with ourselves.  Our success as a species leads us to places we might not be comfortable being.  I was recently exposed to the documentary National Bird.  It’s about drones.  Not the friendly ones from Amazon that we hear will soon be delivering books to our doorstep, but the military grade kind.  I first became aware of how pervasive the military use of drones is while reading Wired for War (on which I posted here some years back).  The difference between that academic knowledge and watching the documentary is the human element.  Drones are assassination machines with high explosives and they are subject to no regulation. 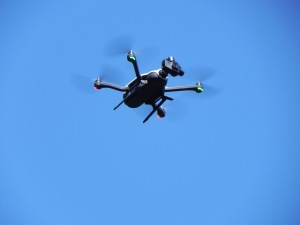 Many of us feel, occasionally, some level of discomfort with how much information “they” have on us.  We don’t even know who “they” are or what they want.  Using the internet, we give them our information.  Caving to our desire for instant communication, we carry around smart phones that know where we are constantly.  Martin Luther once said you couldn’t stop birds from flying over your head, but you can prevent them from making a nest in your hair.  It’s becoming harder to shoo them away.  The nest is well established.  Our houses are easily found on Google maps, and drones can keep constant watch, like weaponized guardian angels.  Only they’re not our guardians.  As National Bird makes clear, drones kill civilians.  Women and children.  The conversations of the operators reveal how much they’ve bought into the jingoism of the “war on terror.”  The film also deals with the human cost of those who operate drones.

Technology stands to make life better, for some.  Watching people who have very little, who live in what would be considered poverty in this part of the world, being bombed by people remotely, is disturbing.  The operators, trained as if they’re playing a game, kill and then have to deal with it.  The use of tech to try to sanitize brutality was dealt with decades ago on a particularly famous episode of Star Trek appropriately called “A Taste of Armageddon.”  Rather than try to resolve conflict we, like those of Eminiar 7, readily accept it if it’s kept at a distance.  Only drones aren’t science fiction.  We’ve been using them for over a decade now, and we prefer not to think about it.  This isn’t an option, unfortunately, for those who’ve been targeted by technology.  The predators are still out there after all.