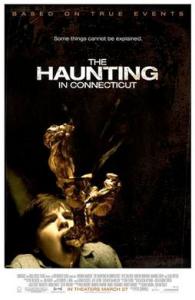 In my on-going research (as I think of it), I watched The Haunting in Connecticut.  I recently wrote about A Haunting in Connecticut, distinguished from the theatrical version by an indefinite article.  Both claim to be based on a true story and the story itself is disputed because it doesn’t fit into a materialist paradigm.  Ah, but that’s another can of worms.  Regarding the movie, it abandons the base story to add an entirely fictional subplot that drives the horror.  Or so the writers and director think.  The tale ends up jumbled and the confusion it generates is not the kind borne of intelligent planning.  The Campbell family, struggling to pay the bills against a case of childhood cancer is real horror.  In our healthcare system that is a true story.

According to the diegesis of the movie, Matt Campbell can see the dead because he’s close to death.  In case you don’t know the story—the family has to move to be closer to the hospital where Matt is receiving his treatment.  Once ensconced in their new house they learn it used to be a funeral home and hauntings ensue.  The writer of the original book claims to have made much of it up, while interviews with witnesses make the claim that much of it actually happened.  Matt ends up in a mental hospital.  In the movie a subplot of necromancy and a young boy medium are added.  Souls whose bodies have been bound are trapped in the house until Matt figures out how to break the spell with the help of the medium’s ghost.  Instead of Ed and Lorraine Warren investigating, a local minister is added.  Also suffering from cancer, he figures it out too, but too late to help the Campbell family.

In Holy Horror and Nightmares with the Bible I do not treat made-for-television movies.  A large part of the reason is that they often lack the cultural impact of a theatrical release.  (Although Game of Thrones and The Walking Dead may have reached a point of familiarity with numbers to rival big screen efforts.)  In the case of the cinematic treatment of the Snedeker (“Campbell”) family, however, the television treatment might well have been scarier than the big-budget studio effort.  Whether fictionalized or not, the Discovery Channel show stays closer to the book (In a Dark Place, by Ray Garton).  Using the Usher-like ending of destroying the house doesn’t seem to offer any release in the big-screen version.  Sometimes reality is scarier than the tales we tell after dark.