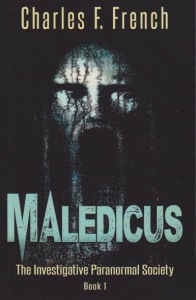 From the way he writes, Charles F. French was a Marine.  I don’t know that for certain, but those of us who venture into fiction put ourselves into our stories.  Those who blithely reject something into which you’ve poured yourself are either boorish or unfeeling.  Yes, even literary types can be so.  This year’s reading challenge includes a book from a local author.  Since I live within a (long) commuting distance of the city, I suppose I could count New York as local.  That felt like cheating, though.  To find local authors you have to haunt independent bookstores.  I do that anyway, and a few weeks ago I found a copy of French’s Maledicus.  It fit the bill.

Although the story is about the titular demon, the ensemble protagonists are mostly military men.  There’s a strong sense of combat-readiness among them, and a good deal about military honor.  I have to admit this made me a little sad.  Don’t get me wrong, I have respect for those who are willing to fight to protect their country.  I’m sad because we need military forces at all.  I’m also a born pacifist.  My father was a veteran of the Korean War.  The military was present at his otherwise sparsely attended funeral.  I grew up reading the Bible and committed to the peaceful resolution of disagreements.  In my idealized world, we really wouldn’t need weaponry at all.  There are bad people, yes.  But like Eli Lapp, I wonder how humans can judge such things.  There are good people too.  More of them than there are bad.  More often than not, they are the victims of weaponry.

Given my work on demons, I’m always interested in their origin stories.  Maledicus gives us an evil Roman lieutenant to emperor Caligula (ahem), who is a climber and a sadist.  After his nasty and brutish life, he’s approached by a demon in the next world and joins it.  This even worse Maledicus is then taken on by the Investigative Paranormal Society, which consists of three old men, two of them retired Marines.  So you see how the military comes into it.  I won’t give any spoilers, although to my knowledge I have no local followers here in eastern Pennsylvania.  It’s a nice area for peace, actually.  The same could be said for the rest of the world.  If we put our fears aside and pooled our resources to help the vast majority of good and innocent a good number of our demons would be banished naturally.

1 thought on “A Stiff Salute”