The science-deniers in the White House have had to accommodate themselves to evidence-based facts and they look none too happy about it.  Science denial has a long and venerable history in a certain type of evangelicalism.  Science teaches us that most things are more complex than they seem and this is also true of religions.  There are evangelicals all over the board, but those claiming the name most loudly have been outspoken Trump supporters.  The administration has had a three-year spree of decrying science and now that a very real virus is killing us they have no choice but to listen, albeit reluctantly.  So why do certain strains of evangelicalism deny science?  Is it all for profit?  Is there some kind of biblical mandate?

As someone who spent many years making a living as a biblical scholar (and it still plays into my work), I often think about this.  There is the underlying reliance on miracle as opposed to naturalism, for sure.  If God can do anything then science is ever only contingent.  Any moment a miracle (a word that doesn’t occur in the Bible, by the way) could happen and there’d be no way to measure it.  The main reason, however, goes back to Genesis and its creation stories.  When you read a book first impressions are important.  The Good Book begins with a theological account that eventually came to be taken literally.  It’s as if someone decided to live by a poem, taken as fact.  Some things can’t be expressed except with metaphorical language.  But since this creation takes place up front, any challenge to it is an affront to the Almighty. 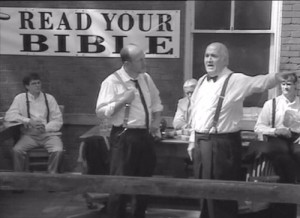 The antagonism set up by Darwin’s discovery of evolution set the whole confrontation in motion.  Evangelicals in the late 1800s were feeling pushed into the corner by the overwhelming evidence that the creation accounts in Genesis were not factual.  This insult to miracle has simmered for well over a century—the Scopes trial, well into this period, took place 95 years ago.  Fear that the Bible’s loss of science authority might somehow lessen its spiritual message became a ditch in which to die.  Big business learned, back in the seventies, that evangelicals made great followers and could constitute a voting bloc if only a cause could be raised around which they’d rally.  We all know what that was.  That issue has led to the denial of science and the acceptance of anyone ill-informed enough to accept such denial.  Only after learning that you must fight pandemics with science has the White House had to start changing its story.  When it’s all over, however, it will go right back to denying everything.