My sci-fi roots may be showing, but when John W. Morehouse posted a story on TheoFantastique’s Facebook page about Dune, I had to follow up.  The story was from Wired magazine, and the title asks “Should There Be a Religion Based on ‘Dune’?”  Although I grew up on Poe, science fiction was my favorite genre as a kid.  Frank Herbert’s classic was published when I was only three, but it was experiencing a resurgence before the movie came out.  Dune was  complex world building.  It was immersive, and compelling.  The movie, I felt, didn’t do it justice.  I’m not surprised that people are now wondering if it shouldn’t become a religion.  Other sci-fi-based religions do exist.  Star Wars and Avatar have both developed fan bases that consider the films their religion. 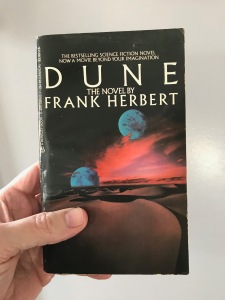 Movies have a way of becoming part of our reality.  The other day I was reflecting on how much my frame of reference for life is based on movies.  I quote from them frequently.  I draw wisdom, and sometimes just plain inanity from them.  But I remember them.  I spend a lot more time reading than I do watching movies.  If a book is engaging I’ll remember it well, but it isn’t unusual to forget—although I hope it’s still there somewhere in deep storage—a book that failed to make much of an impact.  I suppose that’s true of movies too, but I recall my first viewing of The Jungle Book in theaters.  How those hypnotic snake eyes scared me!  And there was a film whose title I can’t recall, but I remember it was vignettes of Hans Christian Andersen stories, I believe.  One was called “The Tinderbox.”  I still remember it well although I was probably about five when I saw it and I never watched it again.

This staying power of movies suggests their religious potential.  People today, I suspect, are less concerned with the antiquity or bona fides of a religion than they are with the practical issue of whether or not it works for them.  Does it bring them near some sense of transcendence?  While the Wired article doesn’t seriously suggest a religion based on Dune, I sometimes ponder how the wisdom of ancient religions is often entombed in forms and structures that “true believers” mistake for the actual essence of the religion itself.  Sci-fi based religions reach for the newly created realms of transcendence.  They are filled with wonder.  But it will only be a matter of time before that awe fades into arguments about which canonical version is literally true.  It’s happened before.

One thought on “More than Sand”