If, like me, you can’t see a neighbor’s brickwork without thinking of “A Cask of Amontillado,” then I need not explain why I watch horror films.  I know that as of late some literary scholars have challenged the idea that Edgar Allan Poe wrote horror.  There is now, and always has been, a bias against the genre.  In fact, many would point out that Rod Serling’s Twilight Zone wasn’t really horror, no matter how creepy some of the episodes were.  Some would cast Ray Bradbury into that lot as well, and others would not.  I spend a lot of time pondering this because those of us who enjoy some of what’s called horror are often cast as misfits.  And misfits have a lot in common with monsters. 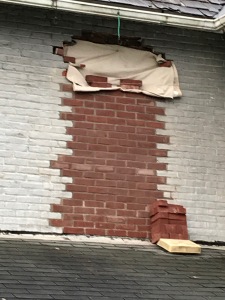 The connection with religion is a palpable, yet intangible one.  It does seem that religion has its origins in fear and as it branched out it came to have different emphases.  Jesus, for example, apparently stressed love, at least according to the gospel of John.  That religion of love came, eventually, back around to fear.  Calvinism, especially, is suffused with it.  There’s a reason that it is the religion expressed in particularly effective horror.  Apparently they meet similar needs, but psychology is not an exact science, and our tastes in it differ.  Even our interpretations do so.  As the bricklayer puts down row after row of masonry, the thoughts get walled up in days where work prevents serious consideration of the deeper questions.

It’s been years since I’ve read “A Cask of Amontillado.”  The story has stayed with me, however, whether it’s horror or not.  Stories about imprisonment are like that.  The other day a police car stopped outside our house.  We live in a working-class, but descent neighborhood.  From the bits and pieces glimpses out the window revealed, there was a problem with a car that had been parked on the street for quite a while, and that didn’t belong to any of the local residents.  The natural response to seeing that car just outside was fear.  We fear criminals and we fear the police.  We fear what Covid-19 is doing to us, even to those of us who’ve managed not to contract it.  Traditional religion would tell us punishment comes from the Almighty.  These things are all related.  And across the way the bricklayer keeps up his work, row after row.

One thought on “Layers of Brick”