The Roman Catholic Church has been making headlines again. Yesterday’s newspaper afforded two headlines to the great mother church – or maybe I should say “pleasant parent church.” The first story regards the Pope’s new book, Jesus of Nazareth-Part II, due for release next week. In it the Teutonic Vater exonerates the Jewish people for the death of Jesus. The embarrassing mastodon in the room, however, is why the church ever blamed the Jews in the first place. From the beginning Christian theology declared Jesus’ death part of God’s master plan. It also provided a convenient excuse for centuries of hate crimes that continue to this day. Believers, however, are quick to justify God’s actions, even when the Bible tentatively raises its own objections. In my prophet’s course, many students had trouble accepting the fact that the story of Micaiah ben-Imlah in 1 Kings 22 indicates that God sanctions lies in the mouths of prophets for a larger divine purpose. Perhaps we should also look for Micaiah ben-Imlah-Part I on the bookstore shelves soon.

The second article, already making its rounds on the Internet, concerns a new translation of the Bible. Shaking the traditional word “booty” from its vaunted position, the Ash Wednesday Bible calls it “spoils of war.” I was pleased to see my personal friend Bishop Sklba interviewed as part of the release publicity. As he rightly notes, “English is a living language,” to which some have subtly added, “and a dying art.” The article rehearses the sophomoric tittering at funny-sounding verses that has plagued the church ever since the laity have been educated. Gelding the Bible is a small price to pay for sanctity.

Regardless of efforts on the part of the religious, the Bible remains an often bawdy text set in the context of a sexist and supersessionist world. It is the world in which the Roman Catholic Church came of age. As we start to see the first, faint blooms of a distant equality beginning to push through a vast leaf-litter of decomposing, brown tradition, the theology and foundational document of the church require some window-dressing. In this world of aggressive, bully governors and oh-so-self-righteous politicians, it is encouraging to see a massive religious organization bashfully blushing and suggesting that shoving others may not be the best method of getting your own way. Could it be that the church still has some valuable lessons to teach the world? 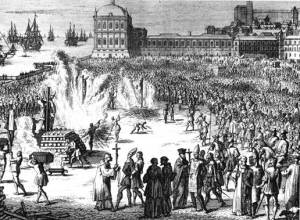 One thought on “Shake Your Booty?”