BBC Two is currently airing a series entitled The Bible’s Buried Secrets, unfortunately not yet viewable in the United States. The episode “Did God Have a Wife?” is presented by my colleague Francesca Stavrakopoulou, who did, no doubt, an admirable job. So once again Asherah finds herself in the news. The issue of monotheism is intricately tied up with how gods related to one another in the ancient conceptual world of Israel and its neighbors. Since the gods were modeled on humans, their behaviors could be embarrassingly human as well. Myths of actual divine marriages are rare, and extra-consortial affairs seem to have been pretty common. This aspect survives in the classical Greek world where Zeus’ many trysts are among his most notable deeds.

In a society like ancient Israel where marriage was a regular expectation of all young people who survived to marriageable age, an obvious mystery attends a single god. If Yahweh is male – and the Hebrew Bible seems not to dispute this point – would he not require a spouse as well? The well known Kuntillet Ajrud and Khirbet el-Qom inscriptions appear to suggest that Yahweh had a wife, and if he had the Religious Right should only rejoice since that would seal their definition of marriage forever in this literalist nation. And yet, the Bible remains decidedly mute on this point. In the end, it is interpreted that male is superior to female, again, pleasing certain religio-political factions. 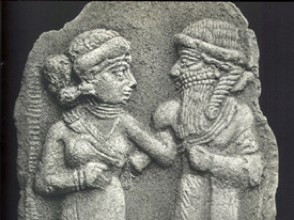 Marriage in a human institution. It is a practice concerning which the Bible is strangely taciturn. In ancient times marriages (unless among the gods) were secular, not sacred ceremonies. Among a human population in danger of dying out through attrition, marriage ensured prolific reproduction. According to Christianity, even God had a kid. In a world that has changed in ways that biblical writers could never have imagined, marriage as a source for an increasing population is more problematic than it is essential. It seems that the jealously guarded definition of marriage is really just another green-eyed monster lurking in the Neo-Con closet. Maybe once Yahweh’s marriage certificate surfaces the issue of what marriage is really about will be discussed rationally.