While on a trip to New England recently, my family had taken an exit to look for a bite of lunch. We followed one of those innocuous dinner-plate symbols that often grace roadside signs next to a stylized hotel bed and a gas pump that looks like a suicidal robot. This particular exit, however, seemed unwilling to deliver on the food part. As we wound down an unfamiliar road, we came across the golden cupolas of a Sikh temple. This was the first Sikh temple I’d ever seen, and my daughter asked why she’s never heard of Sikhs before. “Because they never cause problems,” was my reply. Of the major world religions, Sikhism is notable for its lack of overt violence even though a sword is one of the religion’s symbols. Unfortunately, over the weekend, violence found some innocent Sikhs.

As of the moment, no one is able to identify the motives of the man who gunned down four Sikhs preparing to worship in Wisconsin. For many Americans the religion is a mystery. We hear of Hinduism and Buddhism in the course of many historical and literary ventures. Sikhism is somewhat newer on the world religious scene, but it still predates regular European trade with India during the “age of exploration.” Although the classification of religions is always disputed, Sikhism is generally considered around the sixth largest world religion in terms of numbers, and they have avoided the limelight in the western world, showing that a religion can rest on its principles. One of the truly praiseworthy principles of Sikhism is toleration, an idea that his held in very high regard. 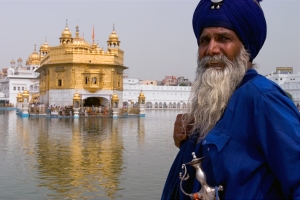 Toleration often clashes with gun ownership in the United States. Just weeks after twelve people were murdered for going to the movies, we have more headlines of private citizens (some mentally disturbed) with ready access to firearms. And more innocent people are dead. Even the shooter is dead, so we will never likely know whether this was simply a case of mistaken identity or hideous intolerance at work. In my time in Wisconsin I came across many Christians who were extremely intolerant of any viewpoint other than their own. Fortunately, they were the vast minority among the people that I knew. Still, the paradigm that I see emerging disturbs me to the core: we claim it is our right to own guns while identifying with a deity who let himself be tortured to death rather than harm anyone. I wonder if a culture can spell schizophrenia?

4 thoughts on “The Price of Tolerance”