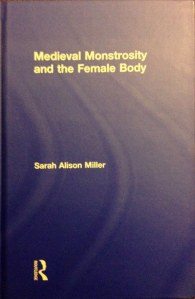 Now that the slow descent into darkness has begun, my mind naturally turns to monsters. In the early days of this blog I felt as though I had to justify writing about monsters when I was limiting myself (mostly) to religion, but it is now clear that many scholars have recognized the connection. Monsters cross over boundaries, and, given religions’ focus on proper borders, declaring monstrosity is often a sacred task. That comes through clearly in Sarah Alison Miller’s Medieval Monstrosity and the Female Body. Utilizing mainly three medieval texts, Miller draws out how they present various aspects of the female body as monstrous. Predictably, the source of their conviction is frequently the viewpoint of the church, the dominant institution of the Middle Ages. Biology was a touch more advanced than it had been in the biblical period, but despite the figures, many writers assumed the male to be the default model of humanity and the female somewhat suspect. Given the multiple pluralities of the natural world around them, this idea is passing strange.

This book is not for the squeamish. Miller plumbs the depths of bodily fluids and the beliefs surrounding them in a pre-scientific era. Male writers wondering at the changes the female body undergoes, however, may have been a necessary stage in the growth of knowledge. It is easy for us today to suppose that equality should have been always on their minds, but Scripture, a large source of authority for medieval mentality, had cast the sexes into an uneasy opposition. The only figure in the Bible who seems sensitive to the unfairness of it all is Jesus. And even his viewpoint couldn’t change the conservative conviction that somehow God was truly the über-male and that all the females of nature were somehow subordinate. Dare we say it? Monstrous.

Miller closes her brief consideration by delving into the writings of Julian of Norwich. Julian was a most remarkable mystic who wrote of God in strikingly feminine terms. Turning those boundary-violating bodies into the sacred, here was one medieval writer who saw the female as normative, salvific, even. Julian never commanded the kind of authority that a male cleric could, but as Miller shows, even men in this period were considering the feminine aspects of a wounded deity. Reformation, however, snapped a masculine, Protestant lid on any such speculation. Today, ironically, many Protestant traditions have, at first reluctantly, admitted female clergy. The religious body of the Middle Ages, the Roman Catholic church, still keeps women in a separate, somehow subordinate role. Monsters come in many forms and they break down boundaries. Some borders, however, may be meant to be breached.