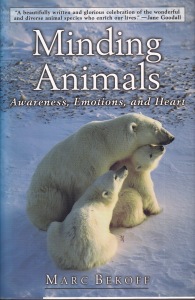 Prominent public intellectuals, we’re used to hearing, often lament the survival of religion into a rationalist age. As an obscure private intellectual—if I may be so bold—I am always pleased to see when a credentialed scientist asks if we are being too hasty. No, but actually says we’re misguided to dismiss the evidence of our own observations. Marc Bekoff’s Minding Animals: Awareness, Emotions, and Heart is an encouraging study by a balanced individual. Bekoff, unlike many scientists, realizes that emotion does play into observation and reasoning. More than that, materialistic reductionism does not account for human or other animals’ experience of life. Historically motivated by religions to separate ourselves from animals, we have only come to know slowly—painfully slowly—that the distinctive markers of humanity are shared in degree by other animals. Bekoff is bold enough to give the lie to the belief that animals have no emotional life. Traditionally science has said that we cannot know what goes on in animal brains so it is best to take animal emotions off the table. Then scientists go home and love their dogs, who love them in return. When’s the last time I read a scientist writing about love?

Minding Animals is a manifesto. We have, in our arrogance, made unwarranted assumptions about both animals and our unique status on the earth. We drive other species of animals to extinction at a rate that required an asteroid collision or some other catastrophic event in the past. And we use animals as if they had no interests of their own, even such basic interests as avoiding pain and suffering. “They’re just animals,” we’re told. Bekoff is an ethologist—someone who studies non-human animal behavior. As common sense, both the sine qua non and bête noire of science, reveals, animals experience and express happiness, anger, and love. They can be depressed. They can be overjoyed. And we treat them as if they were objects to do with as we please.

Bekoff admits some of his fellow scientists treat him as if he’s gone soft. Like Diogenes, however, I search for an honest man and I think I have found him. Instead of castigating religion, Bekoff ends his book with a chapter on theology. Not to make fun of it, but to show that even scientists must integrate different kinds of knowledge. Not only is the science that Bekoff describes appealing to the emotions, it also makes sense. No scientist is completely objective. Even Mr. Spock breaks down once in a while. We all have perspectives. And that includes our fellow earthling animals. We evolved from the same ancestors and yet treat them as if we own them. Minding Animals will—or at least should—make us feel guilty about that. Being human and being humane, after all, are only a silent e apart.